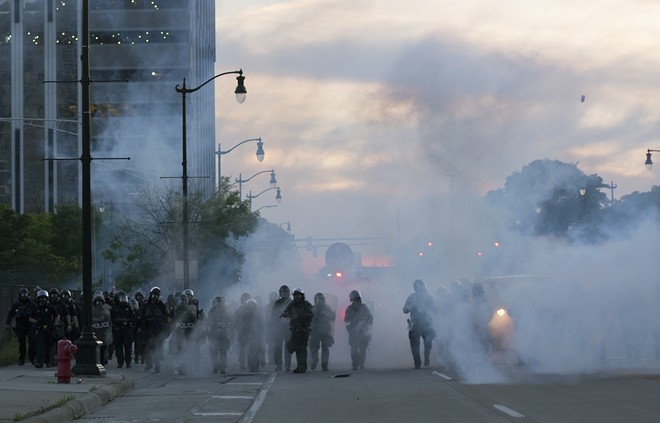 Lawmakers introduced resolutions in the state House and Senate criticizing police attacks against journalists in Detroit, saying reporters should be able to report on law enforcement without intimidation or violence.

“Throughout the course of American history, the free press has been under assault by individuals at the highest levels of American government,” the resolution states. “Because of these attacks, the United States is now ranked 45 out of 180 countries listed in Reporters Without Borders’ Press Freedom Index, putting the independence and effectiveness of the press as a tool for public accountability under threat.”

Since protests broke out in late May following the death of George Floyd, reporters in Detroit have been arrested, assaulted, and antagonized by overzealous police. One officer has been suspended after he shot rubber bullets at three journalists who were covering a protest at about midnight on May 31. MLive photojournalist Nicole Hester was struck multiple times, “leaving welts and narrowly missing an eye.”

Cops also tackled and shoved reporters and fired tear gas and flash bang grenades at journalists who were trying to cover protests over police brutality.

Just got attacked, punched, kneed and elbowed by police, who threw my phone and broke my glasses. More worried about the protesters. Mass arrests. Out of control in Detroit. That was police brutality. pic.twitter.com/o4dSZ8uMVN


“Journalists are the fourth estate of our democracy — their work shines a light into the inner workings of government to hold public officials accountable,” Sen. Jeremy Moss, D-Southfield, says in a news release. “The attacks by police on journalists during the Black Lives Matter protests are attacks on our democracy. This is right out of the playbook of authoritarian regimes — but we cannot tolerate that here as our Constitution places an emphasis to protect a free press. This resolution is a strong symbol of our unified voice against such criminal activity.”

Rep. Mari Manoogian, D-Birmingham, said the resolution is intended to show the state Legislature's commitment "to every journalist, every editor, every cameraperson, and every producer that we unequivocally stand behind them and will not allow their First Amendment rights to fall by the wayside.”

“The American free press has long been the envy of the world — an ideal which the oppressed journalists of tin-pot dictatorships use as a source of constant inspiration,” Manoogian says. “What we have seen across the country during this resurgence of citizen democracy is nothing short of despicable. State-sanctioned violence by police against our free press is destructive to the democracy to which we have pledged ourselves.”

The U.S. Press Freedom Tracker has reported more than 440 attacks on journalists in more than 60 states since May 25.

"The Michigan Press Association and our members are gravely concerned about the treatment journalists received in the early days of the protests in Michigan,” Lisa McGraw, Public Affairs Manager for the Michigan Press Association, says in a news release. “We truly appreciate the efforts of Representative Manoogian and Senator Moss to recognize the importance of what reporters do for the communities they serve.”