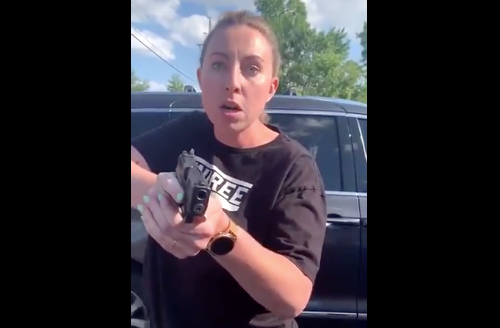 The Oakland County Sheriff’s Office is investigating an angry white woman who pointed a gun at a Black woman during an argument outside of a Chipotle restaurant.

A 1-minute clip of the video was viewed 9.5 million times on Twitter as of 11:30 a.m. Thursday, prompting outrage of yet another white woman overreacting to a Black person.


Takelia Hill, who had the gun drawn on her, said the white woman bumped into her 15-year-old daughter as they were walking to the restaurant in Orion Township at about 8 p.m., according to a Detroit News account. The woman then became angry when the daughter asked for an apology.

“I walked up on the woman yelling at my daughter," Hill said. “She couldn’t see me because her back was to me, but she was in my daughter's face."

What happened next was caught on video.

“She got the gun on me,” the mother or teen says.

“Get the fuck back!” the woman with the gun responds. “Back the fuck up!”

The woman eventually lowers the gun and leaves in an SUV.

In Michigan, it’s illegal to point a gun at someone unless there is an imminent threat of death or great bodily harm.

"People should feel safe going about their day and not have to worry about having a gun pulled on them during a conflict," Bayer says in a written statement. "This incident clearly shows we have much work to do because this is not how we should be treating each other.”

Bayer adds, "There is nothing acceptable about what happened in Orion Township last night at the Chipotle. It is abhorrent to think that some in this country have such a sense of self-righteousness and entitlement that the idea of pulling a gun out on an unarmed child and her mother is OK. It is not, and I condemn anyone who thinks otherwise. My heart goes out to Ms. Hill and her daughters, who may now forever be traumatized by this experience."

Oakland County couple charged with felonious assault after pointing gun at Black woman in Orion Township
By Steve Neavling
News Hits
Thousands of people commented on the video on Twitter.

"Some white folk think black people are animals," @Minstrelshow wrote. "This is what happens when you aren’t around a lot or black people and watch Fox News all day. A lot of white people are paranoid."

@LuvLaTiere added, "Notice how she walked back and screamed.. she did that on purpose so if the lady would have moved closer she could shoot her and scream self defense.. She not fooling nobody.. Glad she didn’t take the bait and kept recording..."