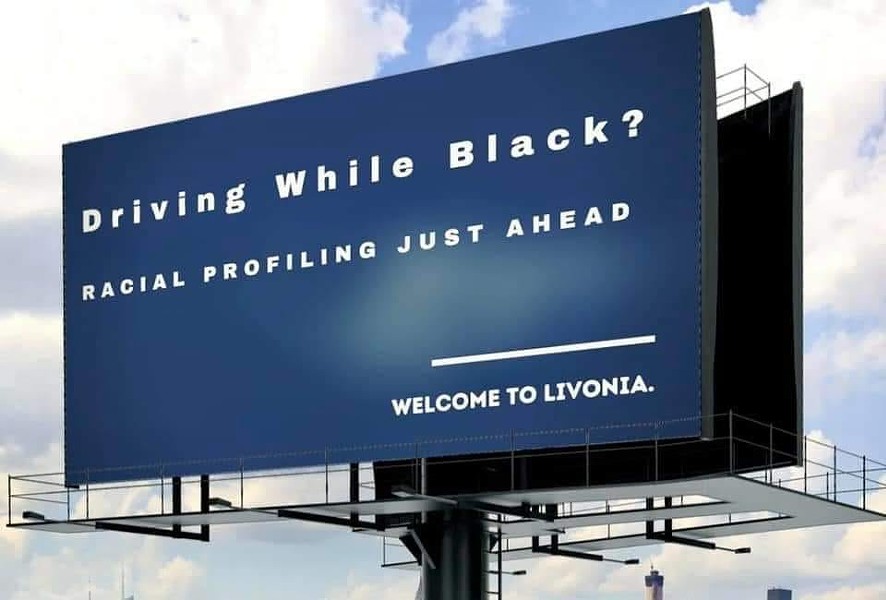 Supporters of the Black Lives Matter movement posted a large billboard over Telegraph Road in Redford Township that warns of racial profiling by Livonia police.

Livonia Citizens Caring About Black Lives raised about $1,800 in three days for the billboard, just south of I-96.

"In my experience, I have seen more Black people pulled over in Livonia than white people, and there are so many more white people than Black people here," organizer Sara Overwater tells WXYZ. “We’ll hopefully bring attention to the problem that people of color in the area know exists.”

The Livonia Police Department denied that its officers racially profile.

“Livonia Police officers do not target their enforcement actions to individuals based on gender, race, religion, ethnicity, etc.,” the department posted on Facebook. “Racial profiling is a serious allegation and is not tolerated. We are proud that Livonia has been consistently ranked as one of the safest cities in the region. Livonia is a welcoming community to all regardless of one's race. This billboard sends the exact opposite message of our values at the Livonia Police Department and of those in our community.”

Livonia is predominantly white and has a reputation of being racist. According to Dr. James Loewen’s research, Livonia was one of metro Detroit's "sundown towns," or places in the late 19th century and early 20th century that had laws and policies that forced Black people and other minorities to leave city limits at sundown to avoid racial violence.

Earlier this year, a Black man sued a Livonia TCF Bank branch after it called the police on him when he tried to cash $99,000 worth of checks, suspecting fraud. (Ironically, the checks were part of a court settlement for a racial discrimination lawsuit against his former employer.)