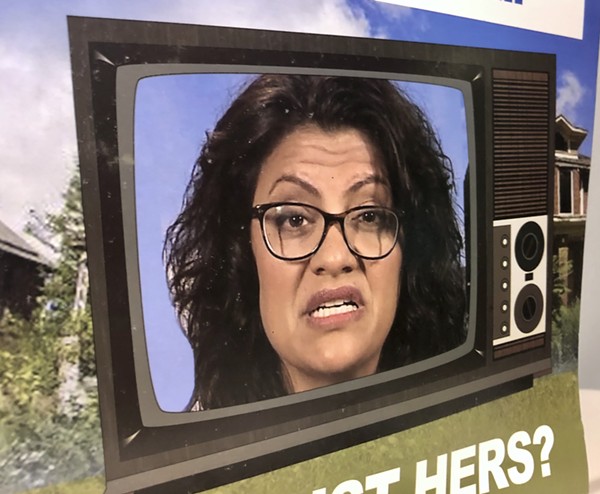 A newly formed super PAC is behind deceitful mailers attacking Rep. Rashida Tlaib with false claims about her first term in Congress.

The Concerned Citizens for Michigan PAC spent nearly $38,000 on mailers that began arriving in voters’ mailboxes this week. The mailer, which features an unflattering image of Tlaib framed by a television, urges voters to support the congresswoman’s candidate Brenda Jones, who is the Detroit City Council president.

“Has Rashida’s celebrity status on TV improved lives in your community … or just hers?” the front of the mailer reads.

The mailer falsely claims Tlaib has failed to pass laws and “brought home ZERO DOLLARS to the 13th District.”

Truth is, Tlaib signed a bill into law – no small feat with a Republican president and Senate – and has helped bring in hundreds of millions of dollars for local hospitals, Veteran Affairs services, student loan forgiveness, and utilities assistance, to name a few, largely through her very active neighborhood service centers. During the coronavirus pandemic, Tlaib has helped constituents navigate Michigan’s Unemployment Insurance Agency.

“Families are struggling from Detroit to Romulus while Rashida fights for fame in Washington and Hollywood,” the mailer claims.

Not much is known about the PAC. Its assistant treasurer Ranae Moore hung up the phone when Metro Times asked about the mailers.

Moore is a government policy compliance analyst at Dykema Gossett, a law firm that does business with the city of Detroit.

The PAC’s treasurer Christopher Jackson runs the committee out of an apartment along Woodward Avenue in Midtown. Metro Times could not reach him for comment.

It’s not clear who is donating to the PAC because the committee has not yet disclosed its contributions, according to the Federal Election Commission.

Super PACs can raise unlimited sums of money, but they cannot coordinate directly with political candidates. A member of Jones’ campaign team, Marvin Beatty, was the PAC’s original treasurer in April. He told Metro Times he no longer works with the PAC but is helping Jones' campaign. He declined further comment.

Jones violated campaign finance laws that are designed to prevent pay-to-play politics, according to The Intercept. While running for re-election to city council in 2017, Jones accepted nearly $10,000 in campaign contributions from top officials at First Independent Bank, which has a contract to operate a loan program for the Detroit police and pension fund. Jones is a trustee of the pension fund.