Corktown’s Black housing project is a 'target area' for developers 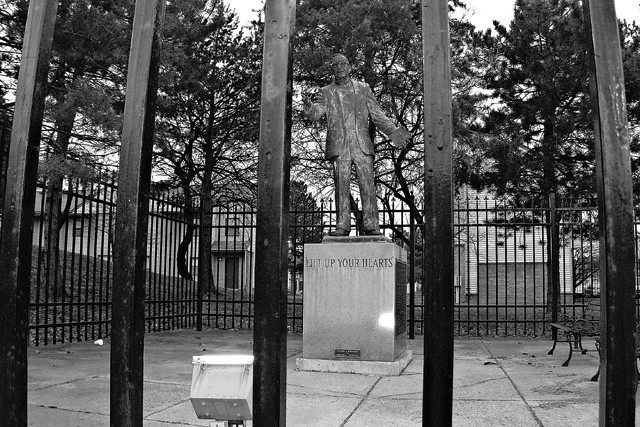 Updated 11:49 a.m., Thursday, July 9: After this story ran, representatives from the City of Detroit and American Community Developers contacted Metro Times to say that they intend to preserve all 87 units of Clement Kern Gardens as affordable housing, and that residents will be invited back to their apartments after the redevelopment is completed. Both Clement Kern Gardens and the Left Field apartments will be a mix of affordable and market-rate apartments, they say.

Picture this: the statue of Fr. Clement Kern, Corktown’s anti-racist and social justice priest, removed from the corner of Bagley and Trumbull where it watches over the low-income housing project which bears his name. The eyes of the developers have fallen on the 87-unit, all-Black and Latino project that was built in 1985 by neighborhood residents, most of whom were compatriots of the beloved priest. In the midst of an otherwise thoroughly white community, Clement Kern Gardens has now become the “target area” and lever for a $30 million Choice Neighborhood Initiative HUD planning and development grant proposal.

Does it have a future? For whom?

COVID-19 seems not to have slowed the financing for development. The gentrification shadow of the Michigan Central Station, now owned by the Ford Motor Company with its $740 million development scheme, falls upon the Gardens. (Indeed, Ford’s “community benefits” process, managed by the consultancy of Sheila Cockrel, is backdrop for the planning grant.) Two and half blocks away, on Michigan Avenue, plans go forward apace on a seven-story luxury hotel. Kitty-corner from that, condominiums can be had for $400,000. Behind the hotel, not far, the other low-income housing apartment building in “historic Corktown,” Victor Attar Court, has been snatched by a buyer through an expedited foreclosure process, though a legal battle is ensuing.

Virtually all of Clem Kern Gardens apartments are Section 8 housing, though these will expire shortly. They are owned by Detroit-based American Community Developers, which holds 97 residential properties in eleven states and posts a stated mission of affordable and environmentally responsible housing. A year and half ago, Michael Essian, vice president of ACD, described repeated calls from developers interested in purchasing the Gardens.

“We know what’s going on,” Essian told The Detroit News. “The vultures are circling, going ‘Well, this is an opportunity here.’ We have to take a long hard look at it and say, you know, if we’re going to prevent this thing from going market rate, what’s it going to take to save it?”

Essian added, “it’s very difficult when you’ve got someone chasing you down to sell a property, and they’re throwing a big number out there. If we don’t have funds to preserve it, it makes the choice a little harder.”

Corktown has faced three major clearings for redevelopment. The first followed World War I and involved the clearing of Irish homes for the building of the train station.

The second, most substantial, was post-World War II and coincided with the clearing of the near eastside neighborhood of Black Bottom, both under the Blighted Area Rehabilitation Act of 1945, which granted Michigan cities the right to acquire “blighted” properties using the power of eminent domain. Then as now, “blight” was a flexible term, the meaning of which mostly conformed to the purposes of those who sought the land. Mexican and Maltese residents organized mightily to preserve their community, signing petitions, doing neighborhood clean-ups, improving their homes, and attending City Council hearings. Corktown’s other activist priest, Father John Mangrum of St. Peter’s Episcopal (full disclosure: I’m retired as pastor from there and he was a predecessor), did not mince words against the designs: “Destroy families, tear up homes, and supplant them with questionable business development, and the wrath of God will fall on this city.”

But the Council voted unanimously to clear 129 acres between Michigan/Bagley and Fort Street. One hundred and forty units of replacement housing promised to displaced residents never materialized. Light industry, as planned, filled the space, except for the two-block buffer zone where the Gardens now sit, which was vacant for a quarter century before the friends of Kern organized the construction.

The third, less visible, was in “North Corktown.” In the mid-'80s Tom Monaghan of Domino's Pizza, then-owner of the Tigers, was covetous of the mom-and-pop parking operations north of the expressway. There’s money in parking. He featured a new stadium built on top of those sites. On behalf of that vision, the City began quickly demolishing houses and land-banking empty lots. One of the dailies filed a FOIA inquiring where the City held land ownership, and though a judge ordered it to be released, and the Director of Community and Economic Development for Detroit went to jail on contempt before releasing the information. When revealed, the largest tract was the footprint of the stadium-to-be ... or not-to-be as it turned out. A different pizza-king, Mike Ilitch, acquired the Tigers and had a different parking vision for the new stadium, downtown. The wide-open spaces left behind have helped foster Detroit’s urban agriculture movement and now falls within the visage of the Choice Neighborhood Initiative HUD grant application.

All Clem Kern residents will relocate for the period of construction. However, the Duggan administration, in answer to questions about the grant application, indicates that while 100% of the Section 8 “replacement units” offered these residents will be in the neighborhood, some 50% of those will be outside of the Kern Gardens site, and even that is contingent on negotiation between American Community Developers (ACD) and their development partner yet to be named. It’s to be a joint venture. Additional subsidized units will be built into the “Left Field” apartments surrounding the old Tiger ball field in which ACD is also a player. Or perhaps farther afield in North Corktown? And this is the best-case scenario.

It is held open by the City that redesign of the Kern site could include additional higher-density structures (market rate? one has to wonder). Meanwhile, ACD is responsible for documenting the “physical distress” of the current units, even “severe distress” as required by the grant. This language seems to be a trigger equivalent to “blight.” Some of the 35-year old units are currently unoccupied and boarded up.

Clem Kern residents are already being convened and surveyed about their hopes and desires for the Gardens. Grocery store access? Park areas for kids? Community meeting space? (There used to be a community center in the project, but years ago a management company converted it to a rental unit, the only one not a Section 8.)

Elena Herrada, former DPS board member and among the first tenants of Clem Kern Gardens, and still a resident of Corktown, recently circulated a letter to residents:

Be prepared. Decide what you want. Do you want to buy a decent place to live in Detroit or outside Detroit? Make them pay. You have something of value they want. Make them give you details and cash up front. They are rich and powerful, but you sit on the land they want. Don’t get bullied out. Set up a text tree for all of your neighbors for when the police start over patrolling even more than they do now. Set up a network for organizing what it is you want to do. If you want to fight removal, I will be with you. Others may, too.


Who is among those others?

By all accounts, including the City’s, American Community Developers has no interest in selling the Kern property. However, the Choice Neighborhood Initiative HUD grant is competitive. If it fails, the current Section 8's will expire and likely be converted to vouchers, scattering people to the wind. The protection of low-income residents will be even less fixed. ACD’s choices may “become a little harder.” The administration says it will move forward in any event. But the current process of meetings and surveys may prove to function mostly as a pacification of those who might indeed have organized. Or perhaps yet may.

Bill Wylie-Kellermann is a nonviolent community activist, author, and retired pastor. Among his most recent books is Where the Water Goes Around: Beloved Detroit (Cascade Press).