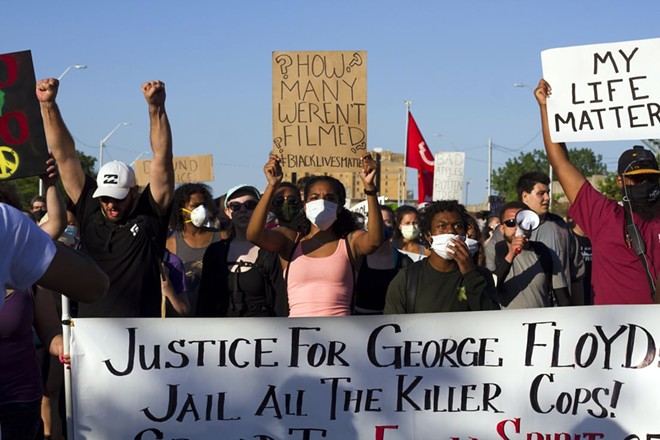 A Black Lives Matter demonstration scheduled to take place in downtown Kalamazoo this weekend will feature close friends of George Floyd, the unarmed 46-year-old Black man who died after a Minneapolis police officer pinned him down, kneeling on his neck for more than 8 minutes.

Floyd's death sparked nationwide unrest and protests demanding police reform, an end to qualified immunity, as well as justice for Floyd, Breonna Taylor, and others in the Black community who have died by the hands of police. One such protest will take place on Saturday, July 11 at Bronson Park in Kalamazoo, MLive reports.

The “Let Your Voice Be Heard” rally will feature former NBA star Stephen Jackson and Milton “Po Boy” Carney, both of whom were friends of Floyd and have appeared at several marches across the country in his honor.

Event organizer and activist Corianna McDowell had reached out to Jackson and Carney via Instagram and they agreed to speak at the event. Western Michigan football players and basketball players from Maple Street Elementary will lead Saturday's event, which will also feature music by DJ Conscious before the start of the march.

“We called each other 'Twin,' bruh. Everybody know me and Floyd called each other 'Twin,'" Jackson shared in an emotional Instagram video following Floyd's death. “My brother was only out there in Minnesota, he was changing his life, he went to Minnesota, he was driving trucks. I just sent him two, three boxes of clothes. My boy was doing what he was supposed to do, man, and y’all go kill my brother, man.”

However, earlier this week Jackson found himself in hot water after he gave support to Philadelphia Eagles wide receiver DeSean Jackson, who shared a post on Instagram that featured a fake quote by Adolf Hitler that said white Jews “will blackmail America. [They] will extort America, their plan for world domination won’t work if the Negroes know who they were.”

Jackson responded on Instagram, saying the NFL player was “speaking the truth” and was “trying to educate himself.”

“But y’all don’t want us to educate ourselves,” he said.

Kalamazoo has also made national headlines in recent weeks after details surrounding a Black teen's death surfaced, in which he was improperly placed in restraint by seven staff members of a for-profit residential youth center after he threw a sandwich in the cafeteria. Before his death, 16-year-old Cornelius Fredericks screamed, “I can’t breathe,” just like Floyd had done in his final moments. He went into cardiac arrest at a hospital and died 30 hours later on May 1.

The video of the incident was released Tuesday by Feiger Law and shows Fredricks engaging in conversation with staff members before being pinned to the ground for an estimated 12 minutes, though the video appears to be spliced. During the video, Fredricks lay limp on the floor for several minutes before chest compressions were performed.

Three facility staff members have since been charged with involuntary manslaughter and child abuse charges.