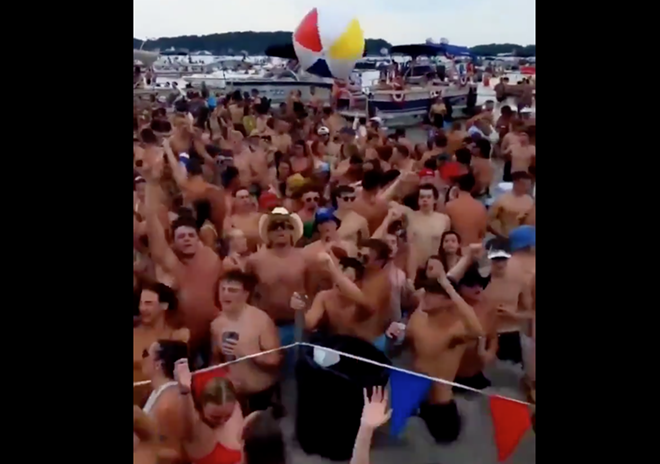 Organizers of a party at Diamond Lake in West Michigan, where hundreds of people without masks packed onto a sandbar on the Fourth of July, face potential charges for defying the state’s social-distancing requirements.

The Michigan Attorney General’s Office has agreed to review the case after the investigation is wrapped up by the Cass County Sheriff’s Office. Citing a conflict of interest, Cass County Prosecutor Victor Fitz asked the state to handle the case.

“The Attorney General's office received a request for a special prosecuting attorney, based on a potential conflict of interest, to look at the organized gathering at Diamond Lake,” AG spokesman Ryan Jarvi tells Metro Times. “Our office has accepted that request and will review the investigation being conducted by the Cass County Sheriff's Office and handle any criminal charges filed as a result of that effort.”

Videos of the party circulated on social media, drawing the ire of public officials. The party was held one day after the state reported the highest number of confirmed COVID-19 cases in more than a month.

Here’s the scene at Diamond Lake in Cass County, Michigan today. Looks like a recipe for disaster...🤦🏽‍♂️ #COVID19 pic.twitter.com/0OfgCXThQw

Behnke said his office shared concerns about the party with organizers, who were “confrontational and not willing to work towards a controlled event.”

In media interviews, one of the organizers has been dismissive about the potential for spreading COVID-19.

Gov. Gretchen Whitmer said Tuesday that events like this could force the state to reimpose restrictions. On Monday, the governor's office released a statement about the party, saying it was "incredibly disappointing to see so many people gathering in large groups and not practicing social distancing."

"COVID-19 is still very present in Michigan, and this is not a time for Michiganders to let their guards down," the statement read. "We must continue to do everything in our power to flatten the curve and prevent more spread."