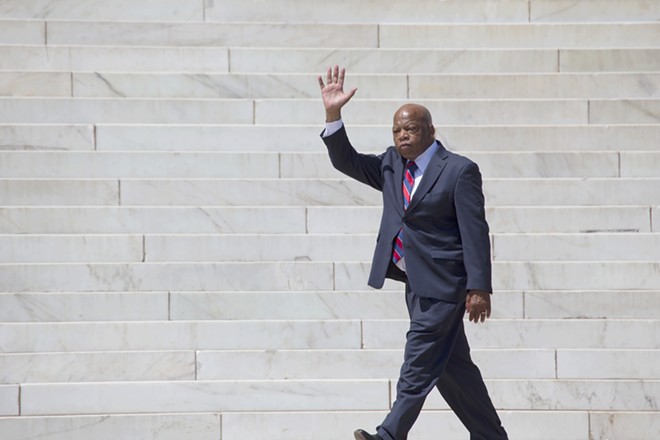 Within hours of each other and not too far apart in Atlanta, two pillars of the civil rights movement joined the ancestors last week. The Rev. C.T. Vivian, 95, was the first to go and later on Friday, Rep. John Lewis, 80, followed him. Their paths to the pantheon of social justice as freedom fighters converged in 1959 in Nashville, Tennessee, where Lewis was a student and, with Vivian, studied civil disobedience and nonviolent protest under the Rev. James Lawson.

Both survived vicious attacks and personal injury during their crusade for social justice, and each eventually soared in Dr. Martin Luther King, Jr.’s orbit, carving their own impressive niches in the nation’s history.

In 1965, when Sheriff Jim Clark was confronted by Vivian during a march for voter registration in Selma, Alabama, the burly sheriff hit Vivian so hard that the minister toppled down the courthouse steps to the sidewalk, stunned and aghast. The incident was captured in Henry Hampton’s remarkable documentary Eyes on the Prize.

That same year in Selma, Lewis was knocked to the ground during a protest march across the Edmund Pettus Bridge and trampled by a crowd fleeing from state troopers wielding nightsticks and other weapons. This, too, can be seen in Eyes on the Prize, with Lewis tumbling to the street and the under the feet of the human stampede. Another photo shows him being savagely beaten by a state trooper.

Unforgettable, too, is the photo of Lewis, his face bloodied and standing beside fellow Freedom Rider, James Zwerg, also a bloody victim of a brutal attack by segregationists in Montgomery, Alabama in the spring of 1961. Three years before, Vivian was nearly killed in St. Augustine, Florida when roving gangs of whites attacked and whipped Black swimmers and bathers with chains, including Vivian, who almost drowned.

Vivian and Lewis seemed to always be where the action was, risking their lives and facing arrests that Lewis experienced some 40 times. They were fearless freedom fighters, never wavering from the nonviolence Lawson taught them.

Born Cordy Tindell Vivian in Boonville, Missouri on July 30, 1924, he was the only child of Robert and Euzetta Tindell Vivian. He was 6 years old when the family moved to Macomb, Illinois. In 1942 he graduated from Macomb High School and later studied history at the University of Western Illinois. After dropping out of the school to become a recreation worker, he found his métier in 1947 helping to desegregate a cafeteria in Peoria, Illinois. Ten years later, while studying at the American Baptist College in Nashville, he attended a local church and heard Dr. King’s speech on nonviolence. Vivian told historian Stephen Oates that he was “spellbound.” He said he had studied Gandhian techniques, but until then had never understood the philosophy behind them.

After a litany of protest marches, rallies, and sit-ins — most memorably in Nashville — Vivian was inducted into Dr. King’s inner circle with such notables as the Rev. Wyatt Tee Walker, Rev. Ralph Abernathy, and the Rev. Fred Shuttlesworth. From 1963 to 1966, he was the national director of more than 80 local affiliates of the Southern Christian Leadership Conference (SCLC). In this capacity, he oversaw nonviolent strategy and tactics, community development programs and projects, chiefly coordinating voter registration drives.

For more than a half century, Vivian was on the battlefield for justice and equality, later becoming the director of the Urban Training Center for Christian Mission in Chicago in 1966 and dean of the Shaw University Divinity School in Raleigh, N.C., in 1972. Among several organizations he founded or co-founded was the National Anti-Klan Network that monitored hate groups. In 1984, Rev. Jesse Jackson retained Vivian’s clergy services during his presidential bid. And Vivian received the Presidential Medal of Freedom from Barack Obama in 2013.

His marriage to Jane Teague ended in divorce and they had one daughter, Jo Anna Walker. He married Octavia Geans in 1952 and they had two daughters. He also fathered three other children.

If after the halcyon days of the civil rights movement Vivian was no longer in the spotlight, such was not the case with John Lewis, mostly because of his long career in Congress.

Lewis was born on Feb. 21, 1940 near Troy, Alabama on a sharecropping farm worked by his parents, Eddie and Willie Mae (Carter). When the family purchased their own farm, Lewis, the third of 10 children, joined his siblings picking cotton, shucking corn, and shaking peanuts from the vines. Lewis’s primary task was to watch over the chickens. In his memoir, Walking with the Wind (1998), he recounted how the chickens were his first congregation. For his sermons to the chickens, he was called the “Preacher.” That talent was honed by listening to Dr. King on the radio and reading about the boycott in Montgomery. A letter to King in 1958 was rewarded with a round-trip bus ticket to visit his idol in Montgomery, a year before he began studying with Vivian and Rev. Lawson.

Like Vivian, Lewis enrolled at American Baptist College, then a theological seminary, working as a dishwasher and janitor to pay his tuition. In Nashville, he soon found himself in the company of James Bevel and Diane Nash, both of whom would become noted civil rights icons. A year after Lawson’s indoctrination, Lewis was arrested for the first time in 1960 after he and other students demanded to be served at a whites-only restaurant. This launched an extended battle of desegregation by the Student Nonviolent Coordinating Committee, better known as Snick.

Soon Lewis had seriously violated his parents’ edict not to cause trouble, but he found it difficult to ignore the courage and commitment of Rosa Parks, Dr. King, and others involved in the fight against discrimination. He made “getting into trouble” his watchwords.

From the sit-ins, after graduation, Lewis joined the Freedom Riders, organized by CORE, the Congress of Racial Equality. Thus began the beatings and bludgeons by white racists, intent on terrifying the Freedom Riders, but Lewis retained a nonviolent philosophy, even as others were beginning to question the tactics, ready and willing to fight back.

Vivian and Lewis seemed to always be where the action was, risking their lives and facing arrests. tweet this
A high point of Lewis’s career and a moment well-documented occurred at the March on Washington in 1963. As the leader of Snick, he was among the guest speakers at the march and was forced to tamp down his militant speech, which he rewrote with the help of his colleagues, including James Forman and Courtland Cox. His philosophy became increasingly unpopular in urban America, then seething with riots and rebellions and urged on by the call for Black Power that was launched by Lewis’ successor at the helm of Snick, Stokely Carmichael (Kwame Ture).

By 1967, Lewis was back in the academy instead of on the frontlines, completing his degree in religion and philosophy at Nashville’s Fisk University. It was there he met Lillian Miles, a librarian, teacher, and former Peace Corps volunteer. They were married in 1968; she died in 2012. Lewis is survived by several siblings and his son, John-Miles Lewis.

Ten years after leaving Fisk, Lewis threw his hat into the political arena for the first time in an unsuccessful bid for Congress. He scored a victory, however, in 1981, winning a seat on Atlanta City Council. Five years later, he sought a House seat that pitted him against his friend and associate Julian Bond. The contest produced some colorful statements from Lewis, who told voters that “I want you to think about sending a workhorse to Washington, not a show horse,” he said during a debate with Bond. “I want you to think about sending a tugboat and not a showboat.”

Lewis upset Bond garnering 52 percent of the vote. Bond, it was reported, won the majority of the Black votes, but Lewis commanded a broader, more diversified bloc of voters. Once in office, he resumed his political activism and arrests, most notably outside the South African Embassy against apartheid and for protesting the genocide in Darfur in the Sudan.

As a congressman, Lewis retained the spirit of Dr. King’s “beloved community,” and his votes rarely deviated too far from his liberal colleagues, especially in his stance on racism, war, and excessive military spending. He was in opposition to the Gulf War in 1991 and the North American Free Trade Agreement in 1992. Most Black Americans agreed with him on these positions but were flummoxed by his refusal to take part in the “Million Man March” in 1995. Minister Louis Farrakhan’s comments, Lewis contended, were “bigoted and divisive.”

His skipping George W. Bush’s inauguration in 2001 was warmly greeted by his constituents, who agreed that Bush had been unfairly elected. Lewis delivered a similar rebuke to Donald Trump in 2017, boycotting his inauguration because of Trump’s cozy relationship with Putin and Russia, who Lewis believed had interfered in the 2016 presidential election. As expected, Trump snapped back at him on Twitter, charging that Lewis was “all talk…and not action!”

Obviously, Trump had not studied Lewis’s résumé on talk or action, which in both cases he was a stellar performer. President Obama certainly knew the depth of that résumé when he presented Lewis with the Presidential Medal of Freedom in 2011, two years before Vivian received his. In December 2019, Lewis was diagnosed with stage 4 pancreatic cancer.

So, right to the end of their eventful lives, the two freedom fighters attained the same honor from the same person on their way from this earthly plane to a possibly higher order of recognition and glory.