Trump vows to send federal agents to Detroit, like those seen in Portland 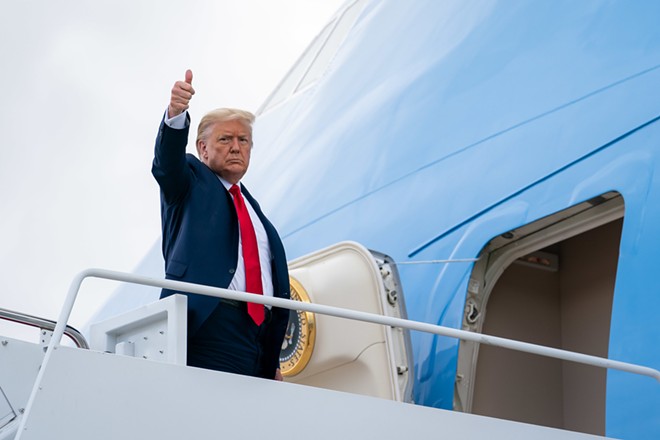 Trump made the comments at the White House on Monday, following reports of Black Lives Matter protesters being picked up by mysterious agents in unmarked vans in Portland, Oregon, over the weekend.

"I'm going to do something — that, I can tell you," Trump told reporters, according to The Hill. "Because we're not going to let New York and Chicago and Philadelphia and Detroit and Baltimore and all of these – Oakland is a mess. We're not going to let this happen in our country."

The comment is unusual because Detroit's Black Lives Matter protests have been largely peaceful, without the looting and arsons seen in other cities.

Even in Portland, local leaders have said the federal troops were unwelcome, with Oregon Gov. Kate Brown and Attorney General Ellen Rosenblum calling for the officers to be removed, and Portland Mayor Ted Wheeler saying the presence of the troops is just escalating tensions further.

Rep. Rashida Tlaib said she will resist such a move.

"They'll have to arrest me first if they think they're going to illegally lay their hands on my residents," she wrote on Twitter.

They'll have to arrest me first if they think they're going to illegally lay their hands on my residents. https://t.co/CkGheyGYq8

"It is deeply disturbing that President Trump is once again choosing to spread hateful rhetoric and attempting to suppress the voices of those he doesn't agree with," Whitmer said in a statement. "Quite frankly, the president doesn't know the first thing about Detroit. If he did, he would know that for nearly two months now, Detroiters have gathered to peacefully protest the systemic racism and discrimination that Black Americans face every day. There is no reason for the president to send federal troops into a city where people are demanding change peacefully and respectfully. If the president actually wants to help the people of Michigan, he can start by picking up the phone and telling Mitch McConnell to pass the HEROES Act, so we can provide immediate relief to Michigan's families, schools, and small businesses."

"President Trump’s politically motivated threat to send ‘more federal law enforcement’ to Detroit, among other cities, has nothing to do with protecting public health or safety," Nessel said. "It is about using the power of his office as a cudgel to punish those who use their constitutionally guaranteed rights to express views he disagrees with. Such threats undermine peace and stability in our communities by unnecessarily escalating tensions and encroaching on states’ rights. We are a nation of laws, and the President’s attempts to intimidate our communities with threats of violence could not be more un-American."

“Detroit is one of the few large cities in the country that has experienced no fires, no stores looted, and never requested the National Guard during the protests,“ he said in a statement. “Not sure where the president is getting his information.“