DEA says those are its agents in viral video in Detroit, not the ones Trump said he would send 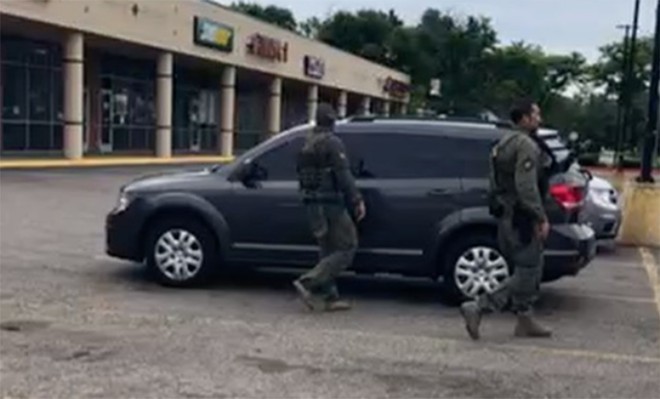 A viral video shows what appears to be federal agents entering unmarked cars in Detroit, leading to wide speculation that those are the officers President Donald Trump promised he would send to to cities "run by liberal Democrats."

But a Drug Enforcement Agency spokesman tells Metro Times the agents shown in the video are its own officers.

The video was shared by Detroit Will Breathe, the group leading Detroit's protests against police brutality. By Tuesday evening it had been viewed tens of thousands of times and shared on social media countless more times.

Public Information Officer Brian McNeal tells Metro Times that the DEA agents were executing an enforcement action in the area.

He could not say for a fact if it was a drug-related enforcement action.

"We do enforce drug laws, but I don't know for a fact that it was drug-related," he says. "It could also be gangs who are involved in drug-related trafficking."

Trump made the comment on Monday after a reporter asked about the mysterious, unidentified agents that were seen on video detaining protesters in Portland, Oregon.

"Unlike nearly every other major city in the country, the Detroit Police Department never requested assistance from the National Guard — we handled our issues as a community," Duggan and Craig said in a joint statement. "We definitely have no need for any federal presence being sent in now."

You can see the video here.