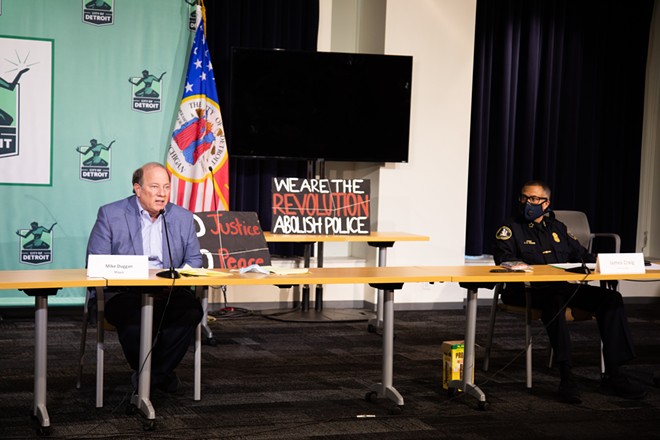 On Monday, Trump said he would send the federal officers to cities "run by liberal Democrats," including Detroit. Trump made the comment after a reporter asked about the mysterious, unidentified agents that were seen on video detaining protesters in Portland, Oregon. Officials there have said the presence of the federal agents is only escalating tensions between the protesters and law enforcement.

But Detroit's protests have been largely peaceful, and have not seen the violence, looting, or arson as other large cities have — which is why Duggan and Craig said the officers are unwelcome here.

In a statement, they said:

Neither the City of Detroit nor the Detroit Police Department has had any contact from any representative of the federal government about any plans to sends DHS officers to Detroit. There could be no possible justification for such an action. The Detroit Police Department has had the support of the Detroit community in making sure our city did not have a single store looted or a single fire started during the protests.

Unlike nearly every other major city in the country, the Detroit Police Department never requested assistance from the National Guard - we handled our issues as a community. We definitely have no need for any federal presence being sent in now.

On Tuesday, protest organizers Detroit Will Breathe posted on Instagram what appeared to be federal officers entering unmarked cars near Seven Mile and Evergreen Roads.

Updated at 7:48 p.m.: A Drug Enforcement Administration spokesman says that the agency was executing an enforcement action at Seven Mile and Evergreen.

Earlier today, several armed DEA, CBP and FBI agents were sighted in plain unmarked cars on Seven Mile and Evergreen. The decision of Donald Trump to utilize federal forces against American citizens exercising our constitutional right to protest is fundamentally racist, faschist and serves as a tactic of political repression. In Portland these agents brutally assaulted and illegally detained protestors, even failing to keep a record of the detentions. The deploying of these forces to Detroit is another step in Trump’s orchestrated and coordinated attack against the free speech of protestors. This is a risk to the lives of Detroiters and is a blatant threat to the public safety of protestors and residents in general. This is a politically motivated attack on the movement in defense of Black lives and the collective unity displayed by integrated crowds demanding an end to the suffering of Black and Brown people in this country at the hands of the government throughout the last two months. This movement has beaten back every attempt to silence and violate our constitutional right to assemble and protest, and we will continue to do so. We will not be intimidated by the presence of federal agents. Therefore, we will continue our mobilizations and actions as planned. Not only do we call on the Trump administration to get his federal troops out of Detroit, but we call on City Council, Mayor Duggan, Gov. Whitmer and Attorney General Dana Nessel to uphold the constitutional rights of protestors against the intimidation tactics of federal agents.