Some shitbag is shooting cats in Wyandotte with a pellet gun 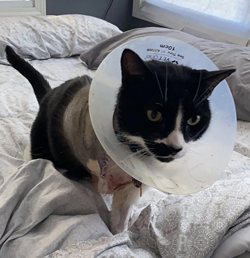 A tuxedo cat named Vega is recovering after suffering pellet gunshots to his chest and front leg, which was amputated earlier this month. The bullet in his chest remains, but owner Amy Hanselman says the vet assured her it should not pose any future complications.

Meanwhile, the shooter — or shooters — have yet to be identified.

Vega is one of several cats that have been recently targeted in the Wyandotte area — and he's one of the lucky ones, as police confirm at least two neighborhood cats have been killed in a similar fashion. However, WDIV reports neighbors believe that number is much higher.

“I opened the door and he was sitting there holding his one leg up,” Hanselman told WDIV. “I thought he had gotten hit by a car.”

When taken to Dix Animal Hospital in Lincoln Park, an X-ray revealed his humerus — the uppermost bone in a cat's front leg — had been shattered by what is described as a “high-power pellet gun.”

“It was amazing he was alive,” she said. “You can see his leg was destroyed.”

Hanselman turned to her community to successfully raise $1,650 for the surgery and preliminary vet costs.

On the Metro Detroit Crime & Homicide Facebook page, several comments suggest whoever is taking aim at felines could be “serial killer” in training.

“This is a sign of a serial killer,” one person alleged. “They always start with animals first.”

One commenter suggested the shooter is likely a teenager. Others said that to look for neighbors with bird feeders, adding the shooter could be someone who is “retired” as no one else has that kind of time to hunt kitties. But not everyone was feeling compassionate.

“Whoever you are can you come in the 8mile&greenfield area PLEASE,” one person begged. Several people echoed the sentiment that at least the shooter isn't targeting people, more specifically, people of color. For Handelman, though, she just wants the shooter held accountable to prevent future violence against other cats, creatures, and possibly people.

“Hopefully somebody knows something and we can get this person arrested or whatever needs to be done to stop this from happening,” Hanselman said. “Who knows what’s next?”

Those with information that could lead to the identification or whereabouts of the shooter are urged to contact the Wyandotte Police Department. Currently, there is a $500-$600 reward for any information about these cat crimes.