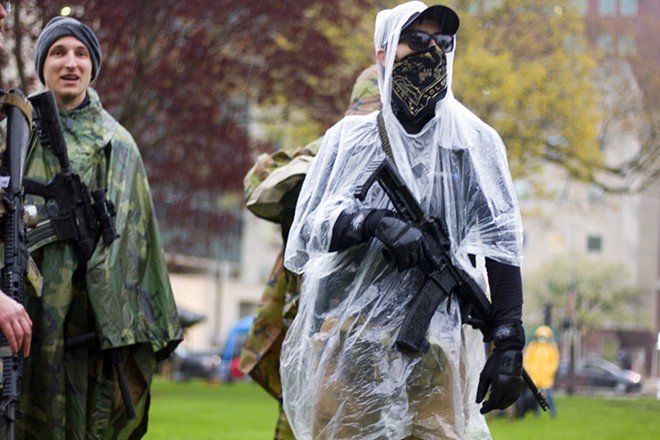 Attorney General Bill Barr took heat during a congressional committee on Tuesday over the differences in the way the Trump administration has treated Black Lives Matter protesters and the armed right-wing anti-lockdown protesters.

In Portland, Oregon, federal enforcement agents have used teargas on BLM protesters and even detained them in unmarked cars, leading to public outcry. But in places like Michigan, where people protested the coronavirus lockdown by brandishing firearms and holding signs calling for Gov. Gretchen Whitmer to be lynched, federal enforcement has been nonexistent.

U.S. Rep. Pramila Jayapal, a Washington Democrat, grilled Barr over the discrepancy, asking, "Are you aware that these protesters called for the governor [Gretchen Whitmer] to be lynched, shot, and beheaded?"

Barr said he was "not aware."

"There are a lot of protests around the United States," he said.

"With certain protests, you’re very aware of those," Jayapal said. "But in Michigan, when protesters carried guns and Confederate flags and swastikas called for the governor to be beheaded and shot and lynched, somehow you're not aware of that ... You didn't send federal agents in to do to the president's supporters what you did to the president’s protesters."

You can watch a clip of the exchange below:

Bill Barr is aggressive towards Black Lives Matter protests but not armed right-wing extremists threatening to lynch a Governor.

Why? Because white men with swastikas storming a Capitol are part of Trump's agenda while people of color protesting injustice are seen as terrorists. pic.twitter.com/hrpUuatIks


Barr has been accused of allowing his personal relationship with President Donald Trump influence the Department of Justice, including personally influencing investigations into Trump's friends, including aid Roger Stone.

Aaron Zelinsky, one of four prosecutors who quit the Stone case, alleged that he and his colleagues were repeatedly pressured to cut Stone "a break" due to his relationship with Trump and because Barr was "afraid of the President."

Barr was also involved in the firing of the top federal prosecutor in Manhattan, U.S. Attorney Geoff Berman, who had investigated Trump's friends.

In recent days, Trump has threatened to send federal enforcement to aid local law enforcement in cities "run by liberal Democrats," including Detroit.

Local officials including Whitmer and Detroit Mayor Mike Duggan have said that they resist the federal government sending agents to deal with Detroit's Black Lives Matter protests, which have largely been peaceful.