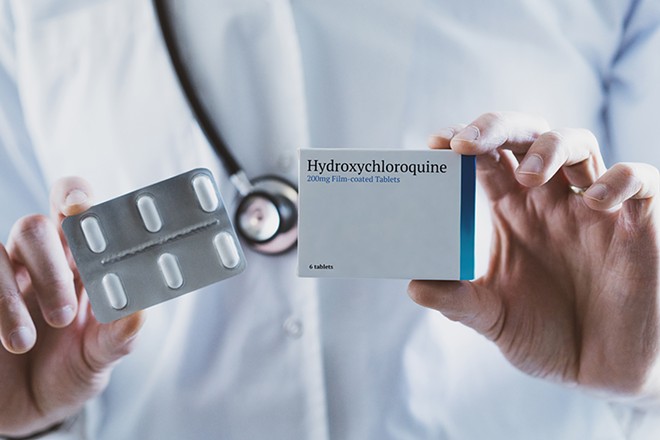 Days after Detroit's Henry Ford Health System released a disputed study in July saying it found that the drug hydroxychloroquine was effective in treating COVID-19 patients, it asked the Food and Drug Administration for emergency use authorization to continue using the drug for some patients. The FDA denied that request this week, the Detroit Free Press reports.

The FDA first revoked emergency use authorization of the drug to treat COVID-19 patients in June, saying "the FDA determined that chloroquine and hydroxychloroquine are unlikely to be effective in treating COVID-19." A number of high-profile studies were even abruptly halted when the drug was found to have adverse cardiac effects on some patients.

The drug has long been touted by President Donald Trump, who accuses the mainstream media of suppressing knowledge of the drug as a potential coronavirus cure, though scientists warn that more studies need to be done to prove its efficacy. When Henry Ford released the results of its study, Trump seized upon the news as proof that he was correct all along.

"The highly respected Henry Ford Health System just reported, based on a large sampling, that HYDROXYCHLOROQUINE cut the death rate in certain sick patients very significantly," he tweeted. "The Dems disparaged it for political reasons (me!). Disgraceful."

However, experts like Dr. Anthony Fauci have criticized the Henry Ford study because it was not randomized and double-blind — the "golden standard" of studies.

Hydroxychloroquine could very well prove to be an effective treatment for some COVID-19 patients, but a randomized, double-blind study has not yet found that to be the case.

And if one does, "I would be the first one to admit it and promote it," Fauci said.

In fact, Henry Ford is working on a randomized, double-blind study of the drug as a potential preventive measure. In one of the largest studies of its kind, Henry Ford has been giving the drug and a placebo to frontline workers like its own nurses and doctors to see if it prevents them from contracting COVID-19.

Henry Ford has not yet released the results of that study, however.

Following the backlash of its disputed study, Henry Ford said it would no longer comment on the drug outside of the medical community.

"Unfortunately, the political climate that has persisted has made any objective discussion about this drug impossible, and we are deeply saddened by this turn of events," the Health System said in a statement.