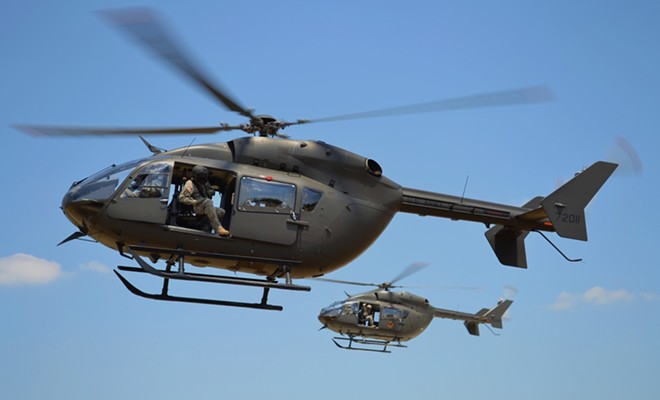 The trio rode in a U.S. Army UH-72 Lakota helicopter to tour the city “and for something else I can’t tell you about,” Craig cryptically said at a news conference, according to The Detroit News.

During a press conference, reporters were asked to give the officials some privacy while an ATF agent briefed the trio on the trip.

Detroit police spokeswoman Nicole Kirkwood said she couldn’t comment on the trip and referred Metro Times’ to an ATF spokeswoman.

"I don’t think there is anything super secret,”ATF spokeswoman Suzanne Dabkowski tells Metro Times. “The purpose was to observe some of the things that the ATF” is doing in Detroit.

Barr was in the city to discuss “Operation Legend,” a federal initiative to combat violent crime in Detroit and a handful of other cities. More than 60 federal agents and analysts have been deployed to Detroit as homicides in Detroit increased 25% and nonfatal shootings rose 51% over this time last year.

"I’m here to see how it’s working," Barr said. "It's very early on, but I wanted to see how the chief was doing; what his experience has been with it, and how we can improve things.

“If Donald Trump and Bill Barr want to hear from people hurt by their toxic agenda, they should watch tonight’s DNC Convention," state Rep. Tyrone Carter, D-Detroit, said in a statement. "While Donald Trump gives lip service to the cause of criminal justice reform, he has failed to deliver and has tried to cut funding to hire more police officers.”

Anti-police brutality protesters, lead by activist group Detroit Will Breathe, have marched against the influx of federal agents in Detroit, saying more resources should be instead be used to address the roots of crime.