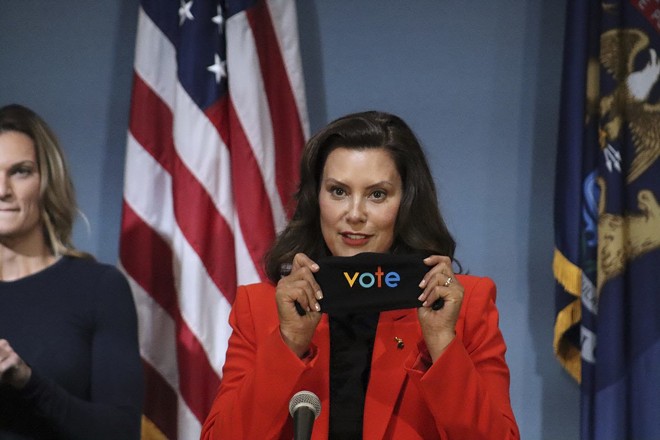 On Monday night, during her four-minute Democratic National Convention address in support of the Joe Biden and Kamala Harris campaign, Governor Gretchen Whitmer did what she does best (aside from, well, saving thousands of lives with her aggressive mask mandates and stay-at-home order in an effort to combat the coronavirus): Whitmer skewered President Donald Trump and gave Michigan yet another viral moment, all while wearing a bomb-ass leather jacket.

Oh, she may have also taken a jab at one of Trump's very publicized phobias. (And, no, we're not talking about his fear of stairs or human decency.)

In the moments before her speech, Whitmer had a self-aware hot-mic moment when she decided to drop what may as well be her new slogan and a much spicier upgrade from “fix the damn roads!”


Whitmer, who was recently and thirstily described by The New York Times as “the dauntless 'woman from Michigan' ... who thinks like a general, looks like a ’40s film star, and talks like she’s ice fishing for muskie” (God, get a room) was sure to only mouth the word “motherfuckers,” but that didn't stop Twitter and Big Gretch stans from demanding her Shark Week comment become the rallying cry for the 2020 election. And anyway, Whitmer joins a list of other Michigan politicians who have publicly dropped the word.

“He was like, ‘I donate to all these charities and I would never donate to any charity that helps sharks. I hope all the sharks die,’” Daniels said.

And it's not just tabloid gossip. Trump himself has gone as far as to rank sharks among “the losers and haters of the world.”

Trump should probably be more fearful of Big Gretch's bite than that of sharks. In 2019, shark attacks were down once again from previous years, with just 64 unprovoked shark attacks around the world, according to the University of Florida's International Shark Attack Summary.

Hell, in 2012, nearly 42,000 people took a trip to the emergency room after being bitten by other humans.

Sharks are last on my list - other than perhaps the losers and haters of the World!


You can watch Whitmer's full speech below.