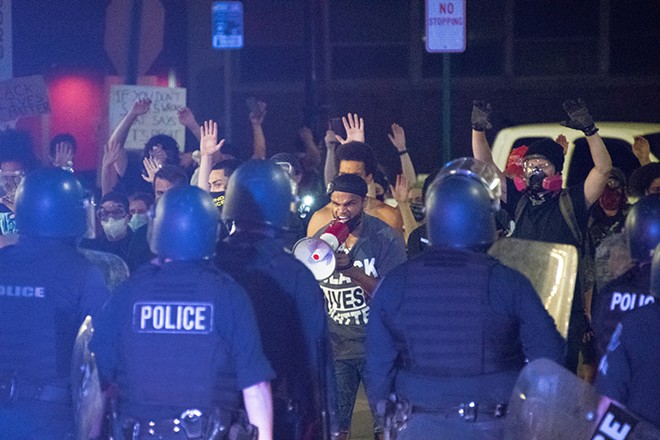 Detroit Police James Craig on Monday defended his officers’ handling of protesters over the weekend, saying demonstrators were trying to set up a protest zone like the one in Seattle.

“I am not going to let any group set up a Seattle-type zone of lawlessness here in the city of Detroit,” Craig told reporters. “That is non-negotiable.”

Police have come under fire after videos showed cops shoving protesters to the ground and striking some of them with batons early Sunday morning. At least five protesters were sent to the hospital with injuries ranging from broken bones to a collapsed lung.

Craig said the department is investigating allegations of excessive force.

Craig said the protest group Detroit Will Breathe pledged on social media to occupy a section of Woodward in downtown until federal agents, who had recently been deployed to Detroit as part of a law enforcement initiative called “Operation Legend,” left the city.

“We aren’t leaving until the feds leave,” Detroit Will Breathe said in a press release.

Deputy Chief Todd Bettison delivered a blunt, if not anti-democratic, message to the protesters: “Detroit Will Breathe, you are not welcome. Go. It’s just not working.”

Craig and Bettison continued to push the narrative that Detroiters – and local activists – don’t support the protests. Truth is, the protests are organized by Detroit activists.

Of the 44 protesters arrested Sunday morning, 16 were from Detroit. All but one of the protesters were released. The one who remains in custody is accused of inciting a riot and wearing body armor while in the commission of a crime.

Asked about police arresting a journalist again, Craig advised reporters to leave the scene of a protest when officers demand that everyone disperses.

State Sen. Stephanie Chang and U.S. Rep. Rashida Tlaib are calling for an investigation into the department’s handling of the protest.

There should be a full independent investigation of this incident and the use of excessive force involved against the Detroit Will Breathe protestors.https://t.co/O3DR4s9qBY

Detroit police clash with peaceful protesters over 'Operation Legend'
By Adam J. Dewey
Local News
Stay on top of Detroit news and views. Sign up for our weekly issue newsletter delivered each Wednesday.