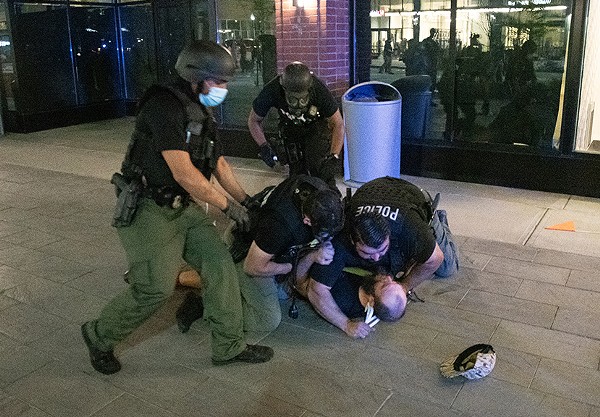 Two lawmakers are joining calls for an investigation after more than 40 peaceful protesters, some of whom were seriously injured by baton-wielding cops, were arrested early Sunday morning for blocking Woodward Avenue in downtown Detroit.

At least five protesters were taken to the hospital.

“There should be a full independent investigation of this incident and the use of excessive force involved against the Detroit Will Breathe protestors,” state Sen. Stephanie Chang said on Twitter Sunday.

Protesters were rallying against the influx of federal agents who are part of “Operation Legend,” a crime-fighting initiative that was recently launched by the Department of Justice.


“The Detroit Police Department has been using the arrests of innocent Black people to deceive the public as they help justify Trump’s racist, scapegoating, ‘tough on crime’ rhetoric that both appeals to his base and creates an atmosphere of authoritarian rule,” Nakia Wallace, an organizer for the protest group Detroit Will Breathe, said in a statement late Saturday night.

Shortly after midnight, police in riot gear used pepper spray, tear gas, batons, and shields to plow through the group of protesters. Police struck protesters with batons and pushed them to the ground. One cop pepper-sprayed a protester in the face while he was held down by officers on the street. 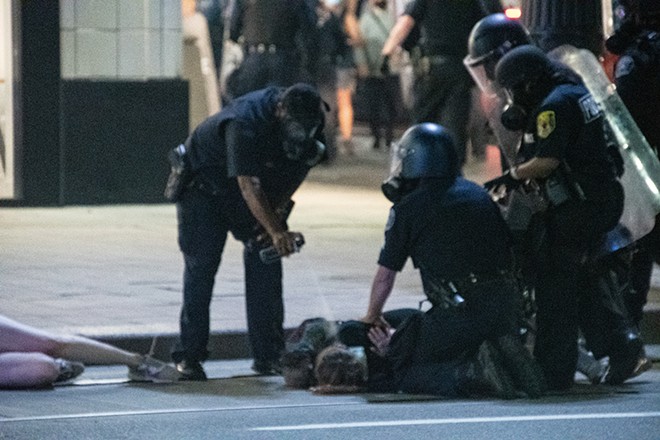 At least five protesters, some of whom were initially denied treatment, were taken to the hospital, witnesses tell Metro Times. One of them was Alex Anest, a clearly marked medic whose rib was broken and lung collapsed when an officer clubbed him in the back with a baton and “dragged me 15 feet across the sidewalk and cuffed me,” Anest said on Facebook. He said he called 911 after he was denied treatment and police held him with a group of detained protesters. He eventually was let go and flagged down protesters for a ride to the hospital at 4 a.m.

Anest was still in the hospital Monday morning.

His friend Matt Hollerbach, who also was arrested, said other protesters had black eyes and cuts on their heads. One had a broken wrist.

“My friend had a hole gouged into his face with a baton and will need surgery to fix a compound wrist fracture,” Hollerbach tells Metro Times.

Kevin Kwart said a cop punched him in the face more than 10 times and injured his shoulder. Both of his eyes were swollen and black and blue.

Kevin Kwart says he was offeringprotesters a safe place in his Woodward apartment building when Detroit police tackled and beat him last night. He was arrested and issued 3 tickets. He says he plans to file a complaint. Police tell me they will investigate alleged abuses. @freep pic.twitter.com/akraceWSL9

“Any allegations of misconduct we will investigate,” Sgt. Nicole Kirkwood tells Metro Times, saying the department is reviewing videos and a photo.

“While there have been a few commissioners who have spoken up about police violence consistently, we need the entire elected Board of Police Commissioners to take action,” Tlaib tweeted Sunday. “We cannot standby while residents & peaceful protestors continue to be harmed.”

While there have been a few commissioners who have spoken up about police violence consistently, we need the entire elected Board of Police Commissioners to take action.

We cannot standby while residents & peaceful protestors continue to be harmed. https://t.co/SD4gogJEpa


Detroit police also were accused of using excessive force on protesters in late March and early April. They also arrested reporters. On July 20, Wayne County Prosecutor Kym Worthy charged a police corporal with three counts of felonious assault for allegedly firing rubber pellets at three photojournalists, all of whom were injured, on May 31.

Detroit police are holding a press conference at 1:30 p.m. to discuss how police handled the protest.

Detroit police clash with peaceful protesters over 'Operation Legend'
By Adam J. Dewey
Local News
Stay on top of Detroit news and views. Sign up for our weekly issue newsletter delivered each Wednesday.