Detroit police accused of 'severely' beating a legal observer, pepper-spraying 2 others at protest

Legal observers say Detroit police targeted and assaulted them during a protest over the weekend, pepper-spraying them and “severely” beating another with a baton while they stood on a sidewalk.

A National Lawyers Guild (NLG) observer was also among 44 people who were arrested at a demonstration against the influx of federal agents as part of “Operation Legend” early Sunday morning.

The actions were “outrageous, unlawful and unconstitutional,” the NLG Detroit and Michigan Chapter said in a statement.

“One DPD officer beat a Legal Observer so severely with his baton that she could not move,” the NLG said in a statement. “When two other Legal Observers attempted to remove the injured LO out of harm’s way, another officer deployed pepper spray directly in all three of their faces.”

Shannon McEvilly, one of the legal observers, tells Metro Times she was shoved by a cop while she was standing on a sidewalk, “so I was unable to observe the arrests taking place.”

Soon after, she said she was maced and struck with a shield while her arms were up. She said another legal observer was “repeatedly” struck with a baton. All of them were wearing neon green hats emblazoned with the words, “National Lawyers Guild LEGAL OBSERVER.”

“The two of us who were not hit with batons put our arms around the legal observer who was, trying to get her to safety, which is when we were maced,” says McEvilly, who still has bruises from the attack. “At no point were we not in our extremely bright, neon green hats.” 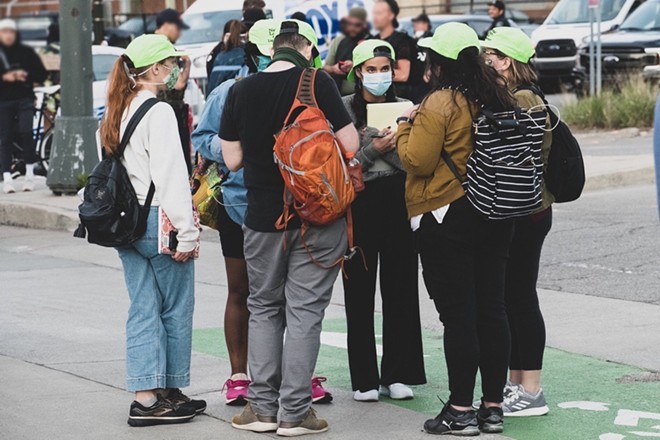 The local chapter of the National Lawyers Guild has observed demonstrations in Detroit for decades. Their role is to neutrally observe and document police behavior to ensure protesters’ First Amendment rights are not violated.

Detroit police have come under fire after videos of the protest circulated on social media. Cops were seen using batons, pepper-spray, tear gas, and shields to plow through protesters standing on Woodward. At least five protesters were taken to the hospital.

State Sen. Stephanie Chang and U.S. Rep. Rashida Tlaib are calling for an investigation into the department’s handling of the protest.

Craig defended his officers’ handling of the protest, suggesting demonstrators were trying to set up a protest zone like the one in Seattle.

“I am not going to let any group set up a Seattle-type zone of lawlessness here in the city of Detroit,” Craig told reporters. “That is non-negotiable.”

At the press conference, Deputy Chief Todd Bettison was more blunt, telling protesters, “you are not welcome here. Go. It’s just not working.”

Protesters vowed to stay the course and said Monday they plan to file a lawsuit against the police department.