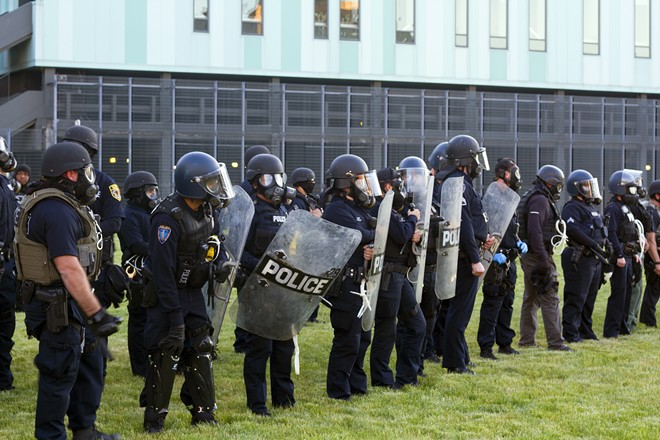 The City of Detroit’s top attorney said he was “pleased to hear” that injured protesters filed a federal lawsuit against city officials and police on Monday because now the city plans to sue demonstrators.

“The litigation will provide the City an opportunity to counter with our own suit — to stop further violations of law and to hopefully reduce the assaults on police officers,” Lawrence Garcia, the City’s corporation counsel, said in a statement.

It’s an unusual claim because a vast majority of the protesters have been peaceful, and even Mayor Mike Duggan and police Chief James Craig have blamed “outside agitators” on the rare cases of violence against police.

Garcia made another unfounded claim, saying protesters are “not about raising awareness around legitimate racial justice concerns.”

“Wearing a bullet-proof vest to a protest shows a certain desire and intent,” Garcia said in a statement. “What is going on nowadays is more about provocation and public nuisance than bringing power to the people.”

To be clear, a vast majority of protesters do not wear body armor to protests. Of the 42 protesters arrested on Aug. 23, one of them was detained for wearing body armor while in the commission of a crime.

These photos document the injuries inflicted against protesters by Detroit police, who were sued in a federal lawsuit today. pic.twitter.com/L1NEZQddwz

“Today is a day we should all be memorializing the death of a Detroit firefighter, lost while trying to save children from drowning; today is a day to say farewell to many Detroiters we have lost to COVID,” Garcia said. “The decision to file and announce this lawsuit right now demonstrates how tone deaf, insensitive, and out of touch the people behind Detroit Will Breathe are.”

The City’s response baffled attorneys for the protesters.