Democrats are way too excited about Biden's Snyder endorsement 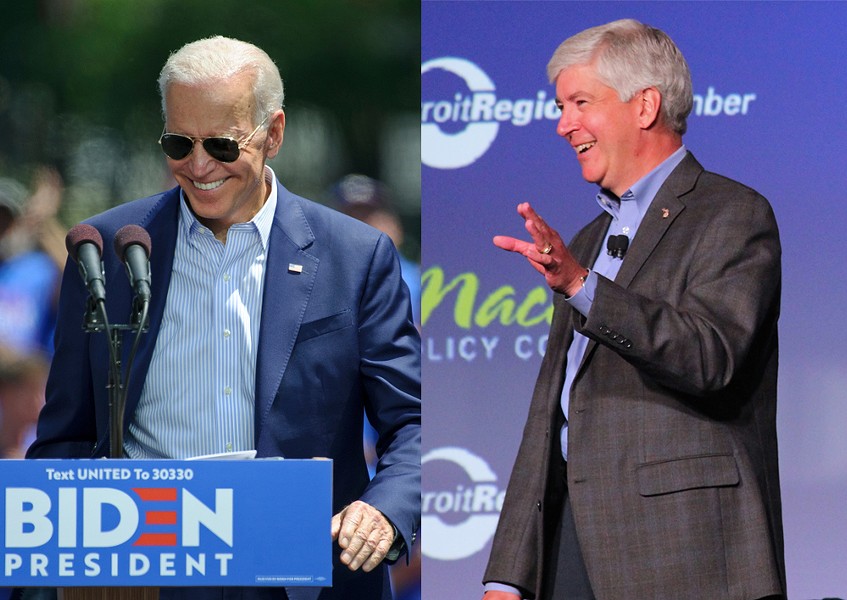 Since he left office in 2019, former Michigan Gov. Rick Snyder has largely kept a low profile. But on Thursday, the Republican broke his silence to to announce in a USA Today op-ed that he was bucking his party and endorsing Democratic candidate Joe Biden for president.

In the op-ed, Snyder called President Donald Trump a "bully" who "lacks a moral compass" and "ignores the truth."

"As a proud nerd, I had to deal with bullies over many years; it is tragedy watching our world suffer from one," Snyder wrote.

The thing about tragedies, though, is that they can be wrought even by nerds like Snyder.

His greatest claim to infamy, of course, is his administration's handling of the Flint water crisis, which was a direct result of Michigan's emergency manager law. The people of Michigan rejected a similar law at the ballot in 2012; when that happened, Snyder and the Republican-led Congress just rammed through a new version that couldn't be rejected by voters. Then, while under emergency management, the city of Flint made the disastrous decision to switch its water supply — which led to its drinking water being poisoned with lead, harming thousands.

Even worse, a bombshell VICE report published earlier this year suggests a coordinated, years-long cover-up of the crisis that goes all the way up to Snyder, who may have known about the crisis much earlier than he testified.

Unsurprisingly, as Snyder's public profile was soured in the wake of the crisis, he has called for a return to "civility" in political discourse. But as the statute of limitations for criminal charges in the Flint crisis passed in April, followed by Michigan announcing a massive $600 million settlement for the victims in August, Snyder remained off the hook.

Now, it seems like Democrats are intent on rehabilitating him, the same way George W. Bush became recast as a fine artist who pals around with Hollywood icons at football games.

An example: How did Michigan Attorney General Dana Nessel, a Democrat whose office was tasked with prosecuting Snyder and his cronies, react to the news of his endorsement of her party's candidate?

"Now that’s THREE things @onetoughnerd and I can agree upon," she wrote on Twitter. "It’s only a matter of time before Michigan football wins a national championship. @JoeBiden should be President. Irrespective of our sexual orientation, we both find @briancalley to be ADORABLE. #Biden2020"

Let's just say Nessel's tweet did little to quell any concerns we had over possible cracks in the "wall" dividing the criminal and civil sides of the water crisis cases in her office.

Even Snyder's predecessor, Democratic Gov. Jennifer Granholm, joined in on the celebration.

"Thank you, @onetoughnerd, for putting country over party," she wrote.

OK, so why does any of this matter? Trump is a bully with no moral compass, so shouldn't we take all the help we can get in voting him out in November?

Well, this would all be a lot easier to swallow if it wasn't an entire news cycle about the backlash to shock jock podcaster Joe Rogan endorsing Biden's former rival, Bernie Sanders. (Rogan has said the N-word on his show, and also said disparaging things about a transgender MMA fighter.) Sanders was criticized for highlighting the endorsement on social media.

And as far as the Biden campaign goes... his campaign quickly sent an email highlighting Snyder's endorsement.

If the Biden camp is so dead-set on celebrating its conservative endorsements, maybe it should focus on Sterling Heights Mayor Michael Taylor, who said he regrets voting for Trump in 2016.

There remain plenty of actual Democrats, however, who feel like Biden is doing little to court them. Maybe he should focus on them.