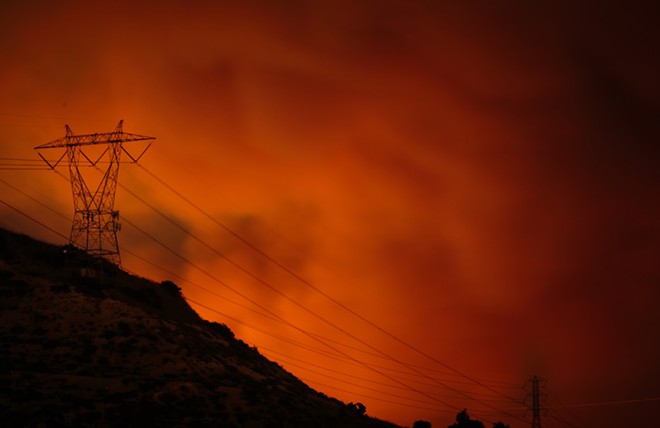 While California chokes on ash and smoke in their cruel Bladerunner 2049-like dystopia, we in the Mitten State might just be lucky enough to reap some Instagram-worthy benefits.

According to The Detroit Free Press, weather forecasters have predicted that Michigan could experience “enhanced” sunsets as a result of the record-breaking and completely devastating wildfires raging through California and much of the West Coast. One such blaze, which has claimed more than 10,000 acres, is reported to have been caused by a gender reveal party gone awry because, yeah, it's very important that you announce to the world what your child's genitals are. In total, more than 3 million acres are ablaze.

Anyway, back to our beautiful sunsets.

Meteorologists say that California's smoke could reach Michigan next week, depending on a few things, like, for instance, weather.

National Weather Service meteorologist Bryan Tilley told Freep that should the smoke travel this far east, it could impact Michigan's air quality — but that's not all.

Apparently, California fires from a few years ago gave Michigan the gift of “stunning” sunsets, as if god themself took a paintbrush and just went full coked-out Bob Ross on our sky, using massive strokes of rich orange, red, and magenta tones. Freep reminds us, too, that some California smoke caused a similar sight last year because California is apparently always on fire. Lucky us!

However, it is possible that the smoke never reaches Michigan, and it could just end up engulfing the sky near the Rocky Mountains. We guess all we can do is hope for another set of eager parents who want to reveal the sex of their child so it can grow up in a world without any sunsets at all.