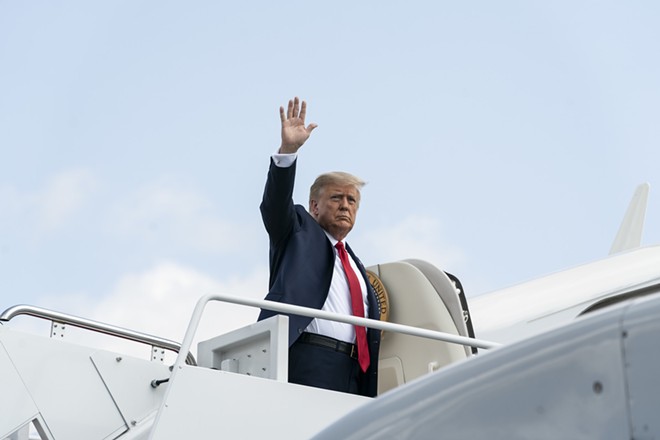 Whoo boy, where do we begin with President Donald Trump's campaign rally held in Freeland on Thursday, outside of Saginaw?

The rally came just after veteran journalist Bob Woodward revealed in taped recordings that Trump was acutely aware of the deadly dangers of the coronavirus as early as February — but chose to downplay its severity "because I don't want to create a panic."

Ahh, yes, if there's anything Trump's known for, it's for not wanting to create panics.

If the messaging from the Trump administration has been... let's say, uneven... from the beginning, that was on full display at his Michigan rally, perhaps best exemplified by this man in the crowd shown wearing a red Make America Great Again hat and a mask that doesn't cover his face.

Here at Avflight Saginaw, where Trump is expected to talk in 2.5 hours pic.twitter.com/KgljLGePUd


In fact, very few of the rally attendees appear to have worn masks.

Very little social distancing and not many masks inside crowded airport hangar in Michigan for Trump rally. pic.twitter.com/KcdYmFYQWR

The mess continued with opening act John James, the Republican who is running to unseat Democratic Senator Gary Peters, who, according to James, "downplayed the virus at the beginning of this year." Uhh, wait until James hears about what Trump said!

John James slams Gary Peters at Trump rally in Freeland, Michigan: "You know what his responsibility is? To prepare us for pandemics. And he failed...And he downplayed the virus at the beginning of this year...and then he wants to come up and talk about getting your vote again" pic.twitter.com/TvWEn8JZi5


The incoherence of the Trump administration's coronavirus messaging was captured by CNN's Jim Acosta, who interviewed maskless attendees about why they refused to wear masks. Reasons given included, "I have a hard time understanding people when they talk," "Because there's no COVID, it's a fake pandemic created to destroy the United States of America," and "I'm not afraid, the good Lord takes care of me ... what are you gonna do, wear a mask and stay inside for another year? Where will that get us?"

The hits continued. Former Detroit Free Press reporter Kathy Gray, now at the New York Times, claimed she was removed from the rally after posting photos showing the maskless crowd.

First for me: Trump campaign tracked me down from pics i tweeted and escorted me out.


When Trump finally arrived, he descended his plane to the backing track of Creedence Clearwater Revival's "Fortunate Son," a song about rich people dodging the Vietnam War draft — which Trump did five times. (Sample lyrics: "Some folks are born silver spoon in hand / Lord, don't they help themselves, no" and "It ain't me, it ain't me / I ain't no millionaire's son.")

Once he got going, Trump also made false claims about reviving Detroit's auto industry (the industry in Michigan has lost jobs during Trump's presidency, even before the pandemic hit).

Despite the clusterfuck, Michigan seems to still love the guy. "This is not a crowd of a person who comes in second place," Trump told his supporters, echoing a line he said at his 2016 campaign's final rally in Grand Rapids.

Trump won Michigan by some 10,000 votes in 2016. Biden has a five-point lead over Trump in the Great Lakes State, according to a recent poll.

What the fuck, Michigan.