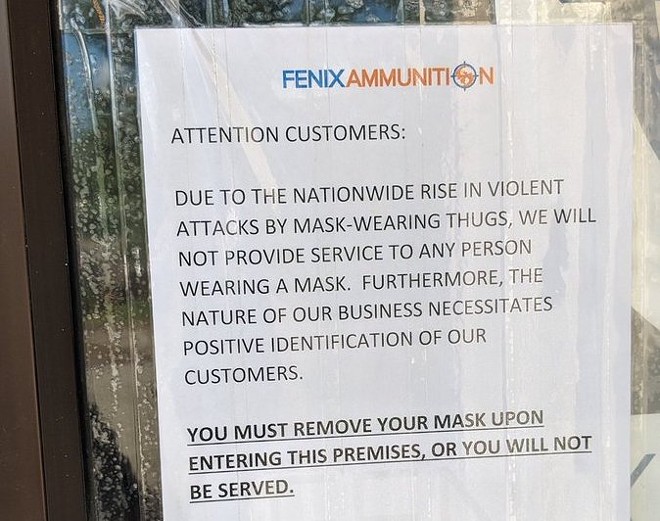 A Novi ammunition store that boasts on social media that it’s taking a stand against the state’s mask order by prohibiting customers from wearing face coverings appears to be all talk.

A day after Metro Times wrote about Fenix Ammunition’s stated anti-mask policy, a Novi police officer and supervisor paid a visit to investigate and found the store was in compliance. Not only was the lone customer wearing a mask, but there were social-distancing markings on the floor and hand sanitizer.

Gone was the sign that the store posted on Twitter that warned customers they were not allowed to enter with a mask.

Turns out, the sign “was a publicity stunt,” the employee told police.

Nevertheless, the store continues to suggest on Twitter that it’s resisting the state’s mask policy, which requires customers to wear face coverings while in stores.

“Mass disobedience will be required for things to change, and it has to start at some point,” Fenix Ammunition tweeted Wednesday. “Why not now? Why not today? Start by leaving your mask in the car at places where you know enforcement is lax or non-existent.”

The store also tweeted, “We can go back to normal if we simply stop allowing politicians to think they have the power to control our lives in the manner they think they do. How do we do this? We ignore them. Publicly.”

The publicity stunt, which appeals to a segment of society that believes mask mandates amount to tyranny, appears to be paying off.

“Just based on your unwavering middle finger in the the face of these idiots, I will definitely be purchasing ammo in the future from you should the need ever arise,” a customer responded.

The sign read: “DUE TO THE NATIONWIDE RISE IN VIOLENT ATTACKS BY MASK-WEARING THUGS, WE WILL NOT PROVIDE SERVICE TO ANY PERSON WEARING A MASK. FURTHERMORE, THE NATURE OF OUR BUSINESS NECESSITATES POSITIVE IDENTIFICATION OF OUR CUSTOMERS. YOU MUST REMOVE YOUR MASK UPON ENTERING THIS PREMISES, OR YOU WILL NOT BE SERVED.”


A sanitarian from Oakland County’s health department stopped by the store Tuesday to show employees how "they could view the faces of customers and still comply with the state of Michigan orders,” county spokesman Bill Mullan tells Metro Times.

On a video posted on Twitter, a store employee is seen shredding a health department report.

Fenix Ammunition has been using Twitter to drum up fear about protests. For months, the store owner Justin Nazaroff had been trying to appeal to supporters of the Boogaloo movement, a far-right anti-government movement.