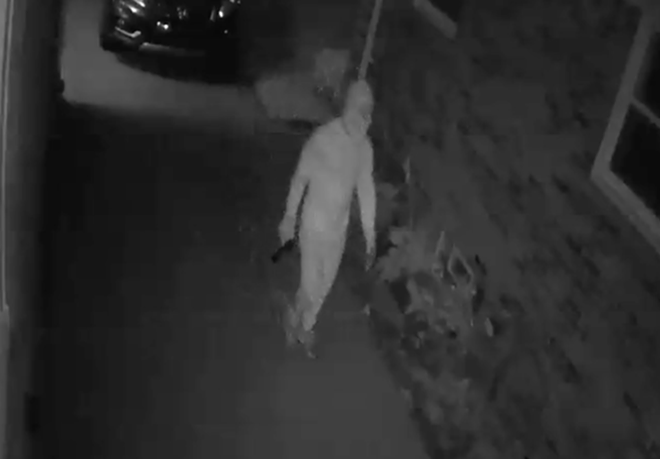 Warren police have arrested a 24-year-old man accused of terrorizing a Black family at their home, and the suspect may be charged with federal hate crimes as early as Wednesday.

For three nights earlier this month, Eddie and Candace Hall were terrified as someone slashed their tires, hurled a rock through their front window, scrawled racist graffiti on their cars, and fired shots into their home, striking their living room couch with a bullet. Six 9mm shell casings were found outside the home.

A surveillance camera captured the suspect in a white mask prowling near the home.

Afraid for their lives, the family stayed in a hotel.

Then on Tuesday, police said they arrested the suspect, and he confessed. His identity has not yet been revealed. Warren police are holding a press conference Wednesday afternoon.

The family believes they were targeted because of a Black Lives Matter sign in a window of their home.

“Thank you Jesus! please let them have the right person!” Candace Hall wrote on Facebook soon after hearing about the arrest.

“They don’t have the right to terrorize me for what I believe in,” Candace Hall told WDIV-4. “That’s why this is such a great America because we can have freedom of speech and we can choose our own beliefs. We can’t hurt each other for our beliefs.”

The family has set up a fundraiser to repair damage to their home and vehicles.

Warren has a long, ugly history of racism. Bordering Detroit, Warren was a virtually all-white enclave through the 1970s, when city officials fervently fought against integrated busing and housing. Black families who dared move into the city were often terrorized and chased out. In 1990, 97.3% of the population was white.

In the 2000s, Warren was slowly integrated. Today, about 18% of Warren’s population is Black.

“Blacks do look like chimpanzees,” Fouts said. “I was watching this Black woman with her daughter and they looked like two chimps.”