The best of Detroit (in the worst of times) 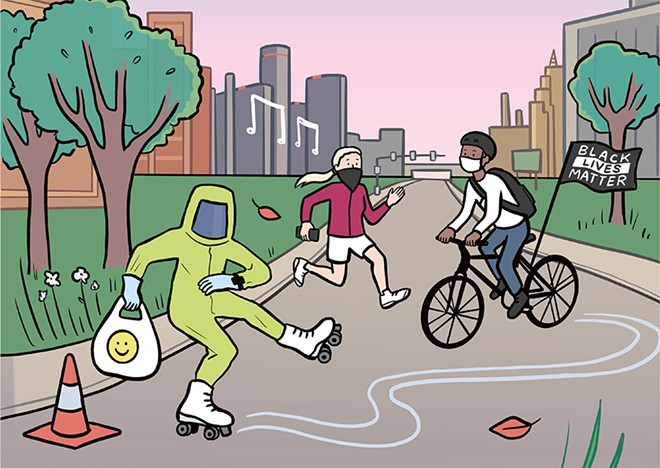 With the coronavirus turning the world upside down, we debated whether we should even do our annual Best of Detroit issue this year. On the one hand, it felt too painful not to be able to celebrate some of our favorite things in 2020, like seeing live music at our city’s wonderful music venues or eating out at the bars and restaurants that are elevating our local dining scene. Even though we saw it coming, it hurt every time we got a press release announcing that an event that we’ve been looking forward to all year, like Movement Electronic Music Festival and the Halloween extravaganza Theatre Bizarre, were canceled. The businesses we have been able to enjoy have been forced to adapt to the virus, like how Kuzzo’s Chicken & Waffles installed plexiglass panes and pivoted to carryout mere days after reopening from a remodeling, or how Detroit Jazz Fest switched to a broadcast format. And then there are the many businesses that could not weather the storm and were forced to close up shop forever.

We paused our online poll and braced for the worst as Detroit became one of the nation’s top COVID-19 hotspots, and even the mighty North American International Auto Show was canceled as the newly renamed TCF Center was transformed into a field hospital. Things got even worse when armed protesters stormed Lansing, demanding an end to Governor Gretchen Whitmer’s pandemic restrictions. But Detroiters put on their masks and took the social-distancing measures seriously. Cases started to drop, and Detroit was no longer declared a hotspot for the virus. Detroiters rallied behind Whitmer, dubbing her “Big Gretch,” and rapper Gmac Cash even raised enough money to bestow her with a pair of Buffs (though she turned the gift down, instead encouraging Cash to return them and give the money to charity).

For now, Detroit has settled into a new normal. People are still dining out, ordering beers on patios or enjoying cocktails-to-go. Local brands pivoted to manufacturing masks, which some fashionistas simply incorporated into their outfits. Bands and DJs have kept the party going, performing outdoors or on livestreams. So earlier this summer, we decided to relaunch our poll, and see what Detroit was digging. Here are the results.