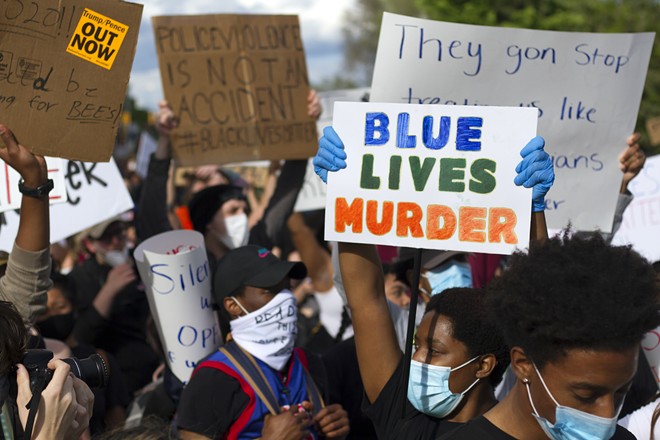 Two bills would also make it a crime to call 911 with false, racially motivated allegations.

“In recent months, we have seen countless people weaponize their white privilege and needlessly escalate conflicts by calling the police on innocent Black and Brown people who have not committed any crime,” the bills' author Sen. Erika Geiss, of Taylor, said in a statement. “Ethnic intimidation against our over-policed communities of color only serves to perpetuate the unjust systems of racism, oppression and discrimination — and it needs to stop.”

Another bill would create the Office of Social Work and Police Partnerships within the Michigan Department of Health and Human Services (MDHHS). The goal is for law enrichment agencies to hire more social workers, counselors and psychologists to connect residents with mental health, substance abuse, housing, and other services. The office also would boost cross-training between police and social workers.

“It's clear after the murders of George Floyd and Breonna Taylor, among so many others before them, that we must reimagine public safety and make meaningful reforms to how our communities are policed,” the bill's author Sen. Stephanie Chang, of Detroit, said in a statement. “This bill package provides common-sense, practical solutions. We can improve how our law enforcement works with our residents by implementing these changes, including more social work and police partnerships.”

Under another bill, the MDHHS Mental Health Diversion Council would recommend best practices and training for police responding to calls involving people with mental illnesses.

“Persons with mental illnesses sometimes have special needs when it comes to being stopped by police,” the bill's author Sen. Sylvia Santana, of Detroit, said, “My bill will provide police with training on this issue so they are better equipped with the knowledge of how to deal with and deescalate these potential situations, and so that we can also ensure no one walks away from a minor altercation injured or in handcuffs unnecessarily.”

A pair of bills would make it easier for victims of sexual misconduct from police to file a complaint and ensure it’s properly investigated.

“Police departments should not be investigating their own officers in cases of police sexual misconduct,” the bill's author Sen. Marshall Bullock, of Detroit, said. “By bringing MDHHS or local medical facilities into the mix, we can make sure that complaints brought forward are properly investigated so that our local police departments can remove the bad apples from their forces if they need to do so.”

Another bill would protect people who launch a complaint about police.

“Anyone who bravely volunteers to blow the whistle on bad behavior by public servants, including police, should be protected,” the bill's author Sen. Jim Ananich, of Flint, said. “Victims and witnesses should feel safe to report these kinds of incidents, and that’s the goal of my bill. I’m proud to partner on this set of bills to make needed updates to public safety and accountability.”

In the aftermath of George Floyd’s death at the hands of Minneapolis police, state Senate Democrats introduced other legislation, including a bill that would require officers to intervene when they observe their colleagues using excessive force. Another would prohibit police from having sex while on duty, and one is aimed at improving diversity within law enforcement by providing scholarships to people of color who want to become officers.

Gov. Gretchen Whitmer unveiled a widespread plan to reform police, from proposing a ban on chokeholds to requiring independent investigations of officer-involved deaths.

It's too early to know whether the Republican-led Legislature would support the bills.