Unlock Michigan, the group caught using illegal tactics in a petition drive to strip Gov. Gretchen Whitmer’s of her emergency powers during the coronavirus pandemic, has submitted 539,000 signatures to state officials on Friday — the same day President Donald Trump announced he tested positive for COVID-19.

Supporters, most of whom weren’t wearing masks, gathered in Lansing with dozens of boxes of petitions.

The group needs 340,047 signatures to repeal the 1945 emergency powers law that authorizes Whitmer to impose restrictions to keep residents safe during the pandemic. But it’s unclear whether the Michigan Secretary of State’s office will recommend the certification of the petitions after videos and photos revealed signature gatherers had used illegal tactics.

In three undercover videos released Wednesday, petition circulators tell residents they can sign the names of people who aren't present, even though signing someone else’s name is illegal. Another undercover video exposed a California company training petitioners how to illegally gather signatures.

Secretary of State Jocelyn Benson previously said it would take 105 days to review the signatures and recommend whether they should be certified. Unlock Michigan insists the process should only take 60 days and has threatened to file suit if it takes longer.

If the signatures are certified before the end of the year, the Republican-controlled Legislature has the authority to approve the repeal. But the petitions aren't certified until next year, Democrats could gain control of the House.

Whitmer’s restrictions are credited for driving down the number of COVID-19 cases during the peak of the pandemic in early April, when Michigan was among the top three states in deaths and confirmed cases.

“We have saved thousands of lives in our fight against the COVID-19 pandemic, especially among our most vulnerable populations – people of color, seniors, and people with disabilities,” Whitmer said Wednesday after she extended the state of emergency to Oct. 27. “Because we took swift action, the health of our families and our economy are faring better than our neighbors in other states.” 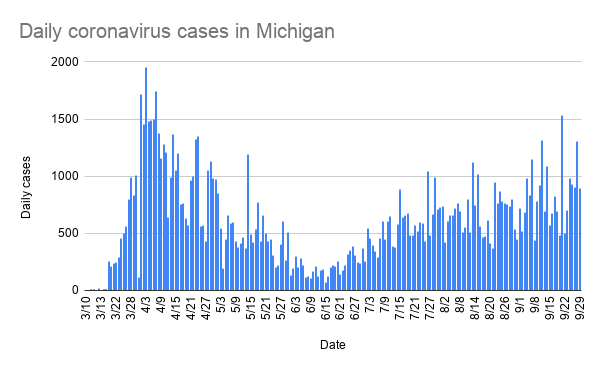