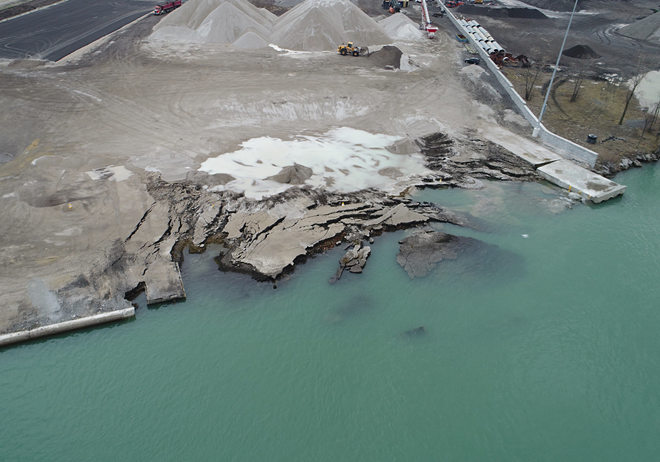 The owner of a collapsed dock that sent contaminated soil into the Detroit River was slapped with $60,000 in fines for violating the Natural Resources and Environmental Protection Act.

The Michigan Department of Environment, Great Lakes, and Energy (EGLE) announced the fines on Monday as part of a consent agreement with Revere Dock LLC, which was illegally stockpiling limestone gravel near the shoreline in southwest Detroit without a permit.

The environmental violations include discharging a substance into the waters of the state that is or may become injurious to the public, animals, or fish; unlawful occupation and filling of floodplain and stream channel; filling of Detroit River bottomlands without a permit; and failing its due care responsibilities.

As part of the consent agreement, EGLE issued a permit to allow Revere Dock to move forward with its restoration plan, which involves installing a 600-foot steel seawall at the site at 5851 W. Jefferson Avenue. The company also must remove sediment and other material that spilled into the river when 200 feet of the dock collapsed under the weight of the stockpile. In addition, Revere Dock must properly dispose of material dredged from the site.

The consent agreement requires the restoration work to be completed by July 2021.

"We are glad to see that the state is working to hold this company accountable for their recklessness and we will continue to work towards advancing policy solutions that protect our Great Lakes and drinking water sources,” Justin Onwenu, organizer with the Sierra Club, which has been coordinating responses to the collapse and cleanup with a broad coalition of advocates, lawmakers and residents, tells Metro Times. “With rising water levels due to climate change, we have a duty to make sure that we're thinking proactively so that this never happens again."

The city of Detroit previously leveled $10,000 in fines against Revere Dock.

For more than four months last year, the city was unaware that large mounds of gravel were piling up on toxic land that was used in the 1940s for manufacturing uranium-based products and later became a dumping ground for other toxins.

Detroit Bulk Storage, which began renting the toxic riverfront property from Revere Dock in May, was prohibited from using the site to stockpile gravel because it lacked a city permit. According to the city, the property, which is about a mile south of the Ambassador Bridge, was supposed to be "vacant commercial land."

Environmental activists are working with the city to create an ordinance to regularly inspect sites along waterways, among other protective measures.