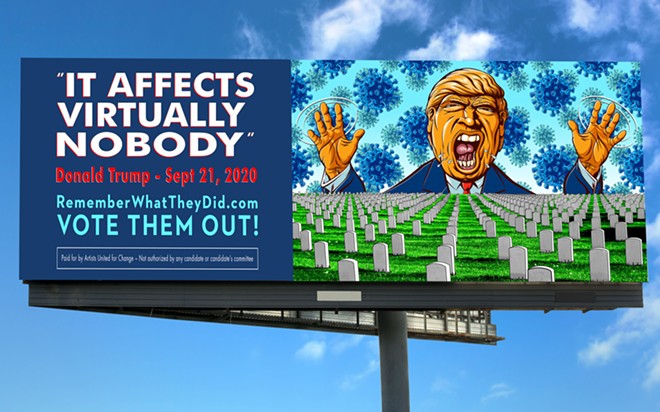 Artists from across the country have teamed up to create striking anti-Trump posters and billboards that will be erected in several battleground states, including Michigan.

More than 40 of the billboards will go up in Detroit, Lansing, Flint, Grand Rapids, and Kalamazoo.

The goal is to encourage people to vote.

The billboard and street art campaign #RememberWhatTheyDid also created a website where people can register to vote, learn more about early voting, and donate to the campaign. The site also offers merchandise.

Super PAC Artists United for Change is sponsoring the campaign.

“Again and again Trump has recklessly incited violence and hate,” Agee said in a statement. “Recent events clearly show he is dangerous for Michigan and America. Voters need to know that John James is bought and paid for by the Trumps and will bring more of the same. Michigan needs leaders who will fight for the people of Michigan, not a puppet for Trump and his billionaire pals.”

The campaign is the brainchild of Robin Bell, known for projecting videos onto the Trump Hotel in Washington D.C., and Scott Goodstein, who worked on the campaign of Barack Obama and Bernie Sanders.

Michigan Democrats blast Trump for hosting 'superspreader' rally in Muskegon
By Steve Neavling
News Hits
“Some forty percent of voters aren’t reached by the usual voter-file matched political advertising and many of these voters are in communities that are underrepresented at the polls,” Goodstein said in a statement. “In an election year this important, we cannot allow any of our communities to be overlooked. We are generating enthusiasm and want to take this groundbreaking program to other key neighborhoods throughout Michigan.”