Sen. Gary Peters makes history by opening up about the life-saving abortion his former wife had in the '80s 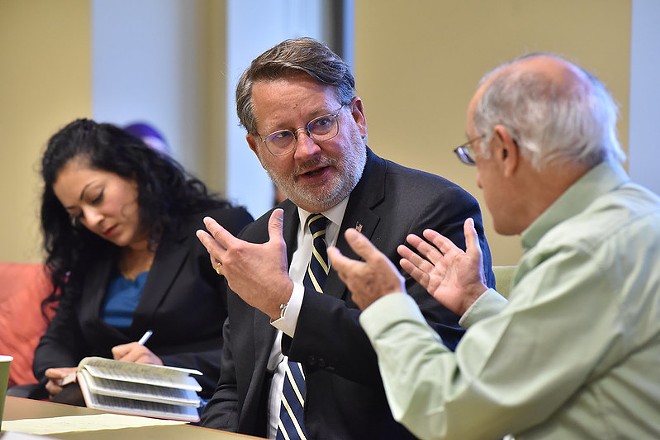 As the Senate Judiciary Committee embarks on its second day of confirmation hearings for President Trump's anti-abortion Supreme Court nominee, Judge Amy Coney Barrett, Michigan Senator Gary Peters took an opportunity to open up about his and his first wife's “gut-wrenching” — and life-saving — abortion.

Peters, a Democrat — who is running against Trump's politically inexperienced pal, Republican John James, in what is shaping up to be an uncomfortably tight race — shared his story with Elle magazine this week, which detailed his and his first wife harrowing medical scare, and the importance of making women's reproductive health options accessible and legal.

As Elle points out, Peters is the first sitting U.S. Senator to publicly do so.

My story is one that’s tragically shared by so many Americans.

It’s a story of gut-wrenching and complicated decisions — but it’s important for folks to understand families face these situations every day.https://t.co/VA3VDbjWrO


When Peters and then-wife, Heidi, were four months pregnant with their second child, her water broke prematurely, which ultimately meant the fetus would die without amniotic fluid. The two were told by doctors to go home and wait for a natural miscarriage.

So, they did. But nothing happened. Doctors recommended an abortion, but the hospital had an anti-abortion policy, even in cases where the fetus had no chance of survival. They continued to wait for a miscarriage but as Peters' details, Heidi's health worsened.

“The mental anguish someone goes through is intense,” Peters told Elle, “trying to have a miscarriage for a child that was wanted.”

On day three of no miscarriage, Peters and his wife returned to the hospital. Heidi was told that she could “lose her uterus in a matter of hours” if she was unable to get an abortion quickly — she could also become septic from the infection and die. Despite the doctor's best efforts to appeal to the hospital's board to waive their no abortion policy, he was denied.

“I still vividly remember he left a message on the answering machine saying, ‘They refused to give me permission, not based on good medical practice, simply based on politics. I recommend you immediately find another physician who can do this procedure quickly,’” Peters said.

Thankfully, they were able to successfully receive an emergency abortion at another hospital. Heidi survived and she was able to keep her uterus.

“It’s important for folks to understand that these things happen to folks every day,” Peters explained. “I’ve always considered myself pro-choice and believe women should be able to make these decisions themselves, but when you live it in real life, you realize the significant impact it can have on a family.”

Senator Peters feels now is the time to share his traumatic story and highlight the necessary and urgent medical care that, despite all obstacles, saved Heidi's life. He also wishes to remind folks that his story is not a unique one and that families face these difficult decisions every day — decisions that may not be possible under Judge Barrett, who once referred to Roe v. Wade legalization as being “barbaric.”

“The new Supreme Court nominee could make a decision that will have major ramifications for reproductive health for women for decades to come,” Peters said. “This is a pivotal moment for reproductive freedom.”