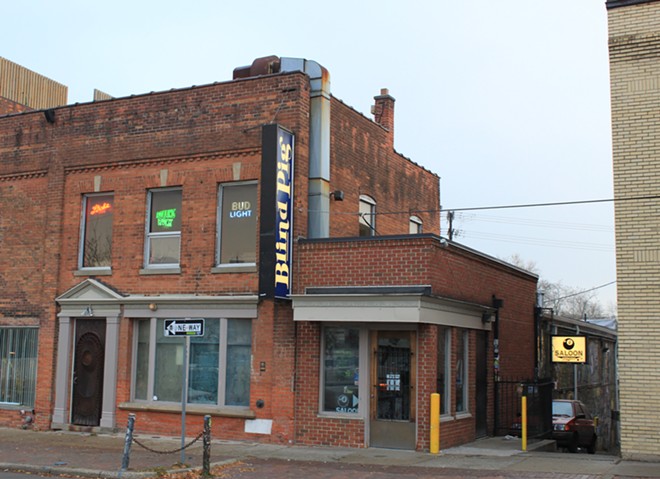 A recent high-profile ad for Joe Biden's campaign that featured a popular Michigan music venue has been removed from the internet — causing confusion, outrage, and even an email to Metro Times from President Donald Trump's Deputy National Press Secretary.

On Sunday, the spot, which ran during a primetime TV NFL slot, highlighted the many venues and performance spaces across the country at risk of shuttering as a result of Trump's pandemic response. It featured Joe Malcoun, co-owner of the Blind Pig — yes, the place where Nirvana absolutely played once — who is seated in the empty club, which has been unable to host performances of any kind since mid-March.

It had all the makings of being a touchdown for the Biden campaign — the Beastie Boys even licensed “Sabotage” for it, something the ad-adverse group had never done before. But the ad was officially taken down from all channels by the Biden team this week, after Malcoun's family began receiving threats — and not because the ad was "fabricated" because Malcoun was "revealed" to be a wealthy tech investor and not a "struggling" bar owner, as many right-leaning outlets began framing as the reason for the ad's removal.

“For 50 years, the Blind Pig has been opened and crowded. But right now it's an empty room,” Malcoun said in the ad. “This is the reality of Trump's COVID response. We don’t know how much longer we can survive without any revenue. A lot of restaurants and bars that have been mainstays for years will not make it through this.”

“This is Donald Trump’s economy,” he adds. “There is no plan, and you don’t know how to go forward.”

The social media backlash to the clip from Trump supporters was chronicled by Forbes. As Forbes reported, “Not all of the comments were exactly civil.”

“The price for having a voice in our political process cannot be endless harassment,” Bill Russo, a spokesman for the campaign, said in an email to The New York Times Wednesday night. “And yet, that is what Joe Malcoun and his family currently face as he was doxxed, harassed, and threatened after the Trump campaign has sought to smear a community leader who dared to speak out against Trump’s failed response to the Covid crisis. It is shameful.”

The Trump campaign took the ad removal as an opportunity to target members of the media, specifically those who covered the commercial's initial rollout — including this alt-weekly.

“Saw that you wrote a piece on Biden’s ‘Blind Pig’ ad that has since been taken down because of rightful backlash from every day Americans offended that the Biden team created this ad,” Ken Farnaso, Trump's Deputy National Press Secretary said in an email sent to Metro Times. “In their desperation to pin something else on the President, they fabricated a story in a last ditch effort to lie to voters because nothing else has worked — and they got caught.”

The email also included a link to an article published by right-wing news site The Daily Caller, which claimed: “Biden Campaign Takes Down Ad After Struggling Bar Owner Revealed As Wealthy Tech Investor.” Fox News also suggested that Malcoun should have instead blamed Gov. Gretchen Whitmer, who shut down the state as COVID-19 cases and deaths surged.

It's not clear if Biden's team was aware of Malcoun's significant financial standing. According to a 2018 interview with AllAboutAnnArbor.com cited by The New York Times, Malcoun said his investor cash is a result of a hefty inheritance following the death of his wife's grandfather, a wealthy real estate investor. Malcoun described the inheritance as a “responsibility” and likened it to “winning the lottery,” albeit “frightening and overwhelming.”

The money allowed Malcoun to become an angel investor, as well as co-found Cahoots, a co-working tech hub in Ann Arbor. In 2017, Malcoun joined a group of investors to purchase the Blind Pig for an undisclosed price. The club had been on the market for 11 months before Malcoun and others swooped in.

News of the club's new ownership sparked concern throughout the community, many fearing the new owners would raze the historic venue to make way for condos or apartments. However, Malcoun quickly put those concerns to rest, telling Crain's Detroit Business that they planned on investing $1 million back into the club to ensure fans and artists have “the best musical experience they can have.” At the time, Malcoun said the investment would go toward updating and redesigning the sound system and stage, as well as an increase to the music budget so the Blind Pig could host more national acts.

“I became a known person in the community because I was always 'on,'” Malcoun said in 2018. “It’s really nothing more than that. I just knew everyone. It’s not like I was this incredibly sophisticated investor, I think I came at it with an understanding of what I didn’t know and I hope I came out of it with some humility.”

Regardless of Malcoun's personal wealth, it doesn't change the fact the venue cannot (and should not) re-open with a deadly virus continuing to surge across the country. Even if Malcoun is not struggling, it doesn't change the fact that it's still a business that is unable to make money and provide jobs for the bartenders and artists who work there.

And it doesn't change the fact that Trump — whose own denial and carelessness regarding the pandemic resulted in him and his family contracting COVID-19 — has no consistent, coherent national response to the pandemic. People follow the lead from the president — whether it comes to wearing masks or attacking his opponents.