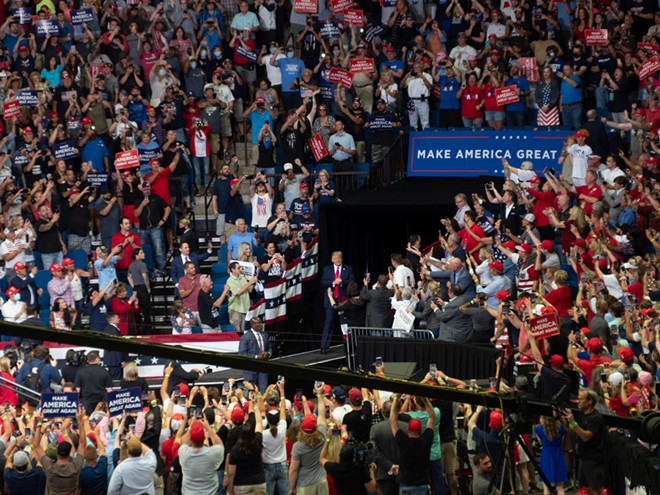 When it was announced earlier this month that President Donald Trump was hospitalized with COVID-19, there was a chance that maybe, just maybe, he would finally start taking this pandemic seriously.

Shortly after leaving Walter Reed Medical Center (where the president, a critic of "socialized medicine," got the finest medical treatment that government can provide), Trump was back on his bullshit — holding massive rallies across the country, where thousands of his supporters gathered, many not wearing masks, as if the whole thing never happened.

And now, Trump is bringing another one of his superspreader events to Michigan. On Friday, his campaign announced a rally on Tuesday, Oct. 27, in Lansing — a week before the Tuesday, Nov. 3 general election.

The rally is scheduled for 2 p.m. at the Capital Region International Airport.

"Yet again, Donald Trump is coming to Michigan to showcase his reckless disregard for our lives as COVID-19 cases spike," the Michigan Democratic Party said in a statement. "From day one of this crisis, Trump has lied, dodged responsibility, and refused to take this deadly pandemic seriously while Michigan pays the price. Now, over 7,000 have died, over 150,000 have been sickened, and countless have lost their jobs or been forced to shut down their business while Trump tanks the economy."

On Friday, the U.S. reported its highly daily number of coronavirus cases, with at least 81,400 new cases reported. More than 222,000 Americans have died from the virus so far.

If you're sick of Trump's plague, there's something you can do about it. You can find out more about voting early here or you can head to michigan.gov/vote for more information.