Trump spews more bullshit about Michigan, Whitmer, and her husband during final debate 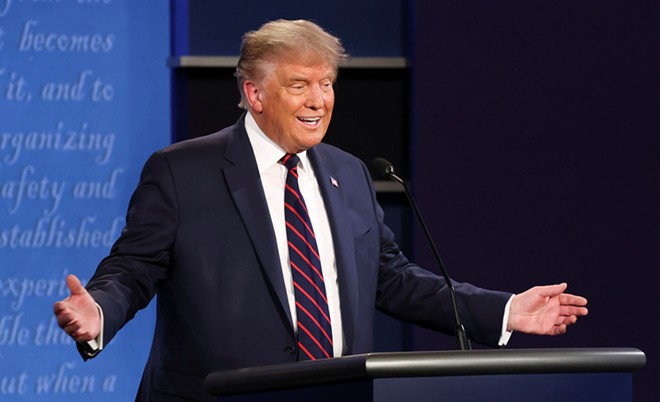 With less than two weeks before the election, President Donald Trump’s lies are getting more desperate and outrageous.

For the third time in two weeks, Trump falsely claimed that everyone in Michigan is locked down except for Gov. Gretchen Whitmer’s husband Mark Mallory.

“Michigan is shut down; it’s like a prison,” Trump said during the final presidential debate Thursday night, adding Whitmer’s husband “is the only one allowed to do anything.”

President Trump slams Gov. Gretchen Whitmer: "Take a look at what's happening with your friend in Michigan -- where her husband's the only one allowed to do anything. It's been like a prison." pic.twitter.com/qsLZgzSWsc


As everyone in Michigan knows, the state has not been locked down for months, and even before the Michigan Supreme Court struck down Whitmer’s executive orders on Oct. 2, residents were free to go to restaurants, movie theaters, gyms, bowling alleys, and any other business or religious venue.

So what’s the deal with Whitmer’s husband, whom the president brought up three times in the last week? Trump appears to be referring to a local dock company owner’s claims that Whitmer’s husband asked the facility to put his boat in the water by Memorial Day, when the restrictions on boating had been lifted. According to the company's owner, Mallory identified himself as the governor’s husband and asked if that might help him get the boat more quickly.

Whitmer later said her husband was joking. Even if Mallory was hoping to get special treatment, he would have been boating at a time when everyone else was allowed.

Trump made the same absurd claims about lockdowns and Whitmer’s husband during a bellicose interview on 60 Minutes and an NBC town hall last week.

Michigan was like a prison for sure under Whitmer’s orders. pic.twitter.com/oZdb7qHde1

Michigan: Not a prison. pic.twitter.com/cy3YeMKEIX


THREAD: Morning everyone. Taking a break from voting posts to, apropos of nothing, post some photos of various places in Michigan - which, most assuredly, is not a prison. #PureMichigan (1/4) pic.twitter.com/yuqNdmsHvn