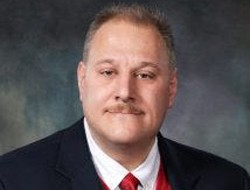 Police are investigating a Warren city councilman who handcuffed a woman for posting Black Lives Matter stickers on a President Donald Trump yard sign in Eastpointe.

Councilman Eddie Kabacinski was attending a Trump rally on Oct. 14 when he told police he spotted a 24-year-old woman putting three stickers on a Trump sign along the street, according to a police report obtained by Metro Times.

Kabacinski chased her down, grabbed her, and handcuffed her while waiting for police to respond, the report states. At some point, Kabacinksi said the woman sprayed him with silly string.

"Putting a decal sticker over a Trump sign, and it says Black Lives Matter, you are promoting a domestic terrorist organization on a Trump sign and that’s not good," he told C&G Newspapers. "That’s not the image that the Trump campaign or the Republican Party is trying to convey. We are trying to get back to law and order in this country.”

Michigan law does not allow a person to make a citizen’s arrest for misdemeanors unless it’s a store employee. But Kabacinski said he’s a former military police officer, and federal law authorizes him to arrest someone for breaking the law.

Police plan to soon turn over the report to the Macomb County Prosecutor’s Office for possible charges.