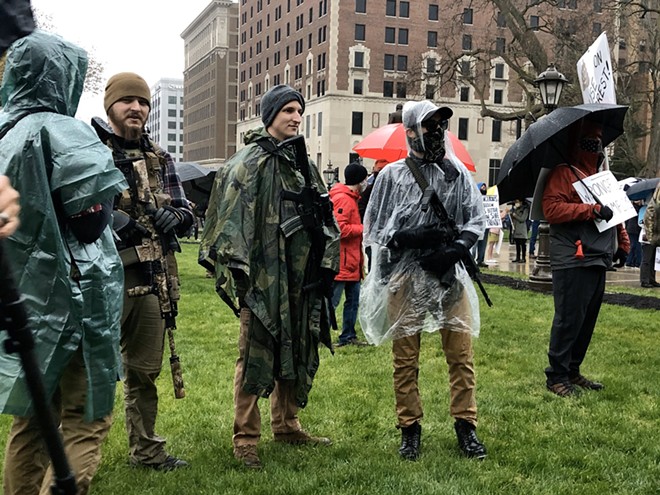 Michigan Republican are out of touch when it comes to guns.

A new poll shows that a vast majority of Michigan voters are opposed to allowing guns in the state Capitol and the open carrying of firearms at polling places. And the opposition crosses party lines.

With a few days before Election Day, 76% of voters said the state Capitol should ban guns, according to a Detroit News-WDIV-TV survey of 600 likely Michigan voters. A scant 18% support guns inside the building.

Support for a ban is so widespread that a majority of Republicans, Democrats, and independents say firearms should not be allowed in the Lansing building. Even 70% of gun-owning voters favor a ban.

The poll has a margin of error of plus or minus 4 percentage points.

Calls to ban guns from the Capitol increased on April 30, when menacing protesters with rifles entered the state Capitol, frightening lawmakers and state employees.


In the aftermath, the Michigan State Capitol Commission weighed banning guns from the Capitol, but most members concluded only the Republican-controlled Legislature has the authority to do so.

Even after Metro Times revealed paranoid, violent rants about Gov. Gretchen Whitmer on private Facebook groups, Republican leaders said they would not support banning guns inside the building.

Republicans also didn’t change their minds after more than a dozen men were charged with plotting to kidnap Whitmer and storm the Capitol in hopes of instigating a civil war.

To head off the potential for violence and voter intimidation at polling locations on Election Day, Michigan Secretary of State Jocelyn Benson banned the open carrying of guns.

But on Tuesday, a judge struck down the ban, saying Benson doesn’t have the authority to impose the directive.

The poll found that 73% of voters supported the ban, and 22% opposed it. A majority of Republicans and Democrats favored the ban. Even two-thirds of gun owners said they support the ban.