Rashida Tlaib's re-election is basically in the bag. She spent hours in the cold knocking on doors anyway. 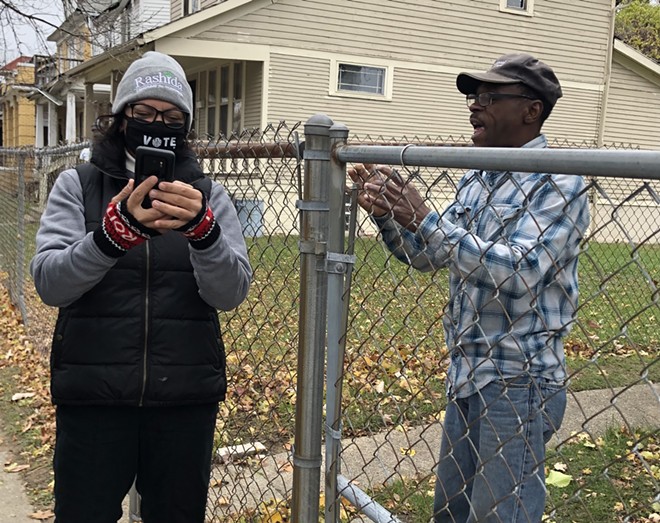 U.S. Rep. Rashida Tlaib is all but certain to be re-elected on Tuesday. Her 13th Congressional District, which includes portions of Detroit, Highland Park, and downriver and western suburbs, is a solid Democratic stronghold that her opponent, Republican David "Dude" Dudenhoefer, has virtually no chance of winning — despite stunts like erecting a "REPLACE RASHIDA" billboard and auctioning off an AR-15 rifle for campaign funds.

"He's only been able to raise money because he's my opponent," Tlaib, an outspoken critic of President Donald Trump, says. "You know how I like to think of it — it's racist money burning."

She adds, "Keep spending it, baby!"

Despite the fact that Tlaib's campaign is comfortable, she still spent hours in the cold on Sunday knocking on doors in Highland Park, reminding her constituents to vote, where their polling station and local clerk's office are located, what they need to bring with them, and if they requested an absentee voter ballot, not send it by mail at this point. If nobody's home, Tlaib leaves a handwritten note and some campaign literature, which includes a voter guide that reminds her constituents to also vote for the nonpartisan section, including the Democratic Party-endorsed Michigan Supreme Court judges Elizabeth Welch and Bridget Mary McCormack.

"I'm fine," she says. "I don't even talk about me." She says she only uses her identity to get people to warm up to her, because oftentimes they recognize her from the news.

"I'm your Congresswoman, Rashida Tlaib!" she says whenever someone answers the door.

Using a canvassing app called MiniVAN, Tlaib's campaign is focusing on more than 40,000 registered voters in her district, including those who voted in 2012 but not in 2016. That year, Democratic presidential nominee Hillary Clinton got about 47,000 fewer votes in Detroit than Barack Obama did in 2012. Donald Trump won Michigan by fewer than 11,000 votes.

"I think it's because no one engaged them," Tlaib says of her constituents. "They're not voting for a reason. Nobody's talking to them. Nobody sees them. Nobody hears them."

Tlaib passes a man sitting in his van, looking despondent.

The man nods no.

"Fuck the vote," the man says.

"I'm your Congresswoman, by the way," she says cheerfully, undeterred.

She hands him some campaign literature — "with my beautiful face on it, so you remember our conversation," she says.

By the end of the encounter the man is cracking a smile.

Along the way, Tlaib takes photos and notes of blighted properties in the neighborhood that appear to have been abandoned. One man says he's been out of work due to the coronavirus pandemic, but is still waiting for unemployment funds. Tlaib promises to contact the state to help get it sorted out.

"You don't think this makes me work harder?" she says.

"It's really changing the way that folks are approaching door-knocking, like, not approaching it as a transactional way of doing things," Denzel McCampbell, Tlaib's communications director, says. "It's like, 'Hey, no matter what happens, I'm your congressperson. This is my team. What do you need?'"

If there is anything at all transactional about her door-knocking campaign, it's because Tlaib, who has long called for Trump's impeachment, believes that she will have more success achieving the legislative goals of her and her so-called "Squad" of fellow progressive congresswomen under Joe Biden and Kamala Harris.

"Right now there's a wall around the White House that none of us can get through," she says. "I need a door that I can bust down, and a Biden administration has much more hope for that."

She promises her constituents that though she supports Biden, she would fight for them when her opinions differ from his.