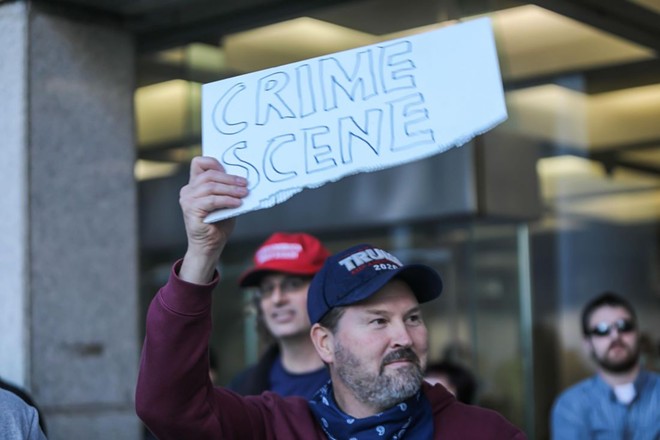 Detroit Police Chief James Craig admitted to treating the supporters of President Donald Trump who stormed the TCF Center last week to disrupt the election differently than the Detroit-based Black Lives Matter supporters that have been marching in the streets protesting racial injustice and police brutality.

The grassroots Black Lives Matter group, Detroit Will Breathe, has criticized Craig for the different treatment. But during an interview with Fox 2 Detroit on Wednesday, Craig accused Detroit Will Breathe of leaving out an important detail regarding its criticism of his department's treatment of the misinformed “stop the count” mob, where some Trump supporters attempted to push their way into the absentee ballot counting center, claiming that Republican poll challengers were not being let inside. (There was already the maximum number of allowed poll watchers present.)

Craig said the TCF Center protesters didn't get the rubber bullet/tear gas treatment typically reserved for the Black Lives Matter protesters because he claimed they were peaceful.

"What they conveniently left out, they were peaceful," he said. "They were chanting and we gave them — just like we gave Detroit Will Breathe — an opportunity to exercise their right to free speech. But not one time did they attack this police department and the one instance when we made an arrest, it was made without incident and it had nothing to do with the protest. And so, factually wrong once again."

Detroit police arrested Rob Cortis, owner of the "Trump Unity Bridge," a sort of roving shrine to Trump, for driving with improper tags.

I took a rubber bullet to the shoulder over the summer protesting for racial liberation, and you called people like me “outside agitators” but... old people from the suburbs literally trying to overturn the election/trying to break into a building is fine?..🥴 https://t.co/aWlBdIUcLe

Detroit Will Breathe marchers have been teargassed and shot with rubber bullets for disobeying an 8 p.m. curfew enacted by the city to curb protests and for also for "occupying" a stretch of Woodward Avenue, blocking traffic.

The Trump supporters who emerged unscathed, meanwhile, were attempting to disrupt an election.

In September, a Federal Court Judge sided with Detroit Will Breathe protesters after the grassroots group sued the Detroit Police Department over claims of excessive force. The judge temporarily barred the department from using certain crowd control tactics, like chokeholds, striking weapons, and tear gas. The decision also barred the arrest of “any demonstrators en masse without probable cause.” As of Monday, the Detroit Police Department is countersuing, alleging Detroit Will Breathe's lawsuit “resulted in conspiracy against the department.”

Detroit Will Breathe is calling for the countersuit to be thrown out. The organization's spokesperson, Tristan Taylor, said the countersuit “underscores our point about the importance of maintaining and defending the right of free speech and protest.”

The group is also calling for Craig's resignation, and will march on Friday to protest “a police chief that sends nonviolent BLM protesters to the hospital but welcomes armed right-wingers into the city to disrupt the vote,” a flyer reads.

They came down from outside the city, forced their way into rooms, crowded inside spaces at numbers that broke all COVID occupancy restrictions, while NOT wearing masks & NOT allowing certain ACTUAL certified election officials in.

It wasn't peaceful OR legal https://t.co/oyAdQPG50m


The TCF Center incident was traced back to a private Facebook group with 79,000 members called “Stand Up Michigan to Unlock Michigan,” which contained posts urging people to “be a presence” outside of the ballot counting center. In May, Metro Times reported on similar Facebook groups which had been linked to violent threats and hate speech against Gov. Gretchen Whitmer and other female Democratic leaders in the state.

Craig, a Black man and a Fox News regular — who in September was hailed by Trump as being “terrific” and an “incredible representative” — told Fox 2 that he frequently meets with people that do not agree with his or his department's policies or tactics, but even those detractors are fed up with Detroit Will Breathe, he claims.

"And they have said, they are tired of this Detroit Will Breathe and they need to go home," he said. "And even when they call now for the second or third time for my resignation, I’ve said it and I will say it again: no, no. I’m not leaving, you leave."

Detroit Will Breathe has met dozens of times to march peacefully without incident.

A “terrific” and “incredible representative,” indeed.

He’s a bitch and a half. We march this Friday. https://t.co/fJcYa6qYLs