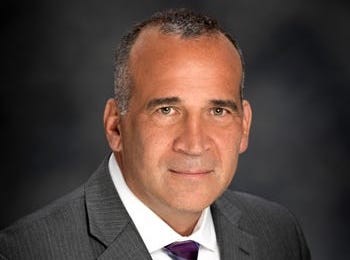 The Farmington Public Schools superintendent and the top two members of the board of education resigned Monday amid allegations of harassment and racism.

During a special meeting Monday, the board accepted the resignation of Superintendent Robert Herrera, who took the helm in May 2019. Board President Pam Green and Vice President Terry Johnson also resigned.

Board member Angie Smith previously alleged Herrera was racist toward Black students and staff, but details of the claims are unclear. The board voted 5-1 to censure Smith for undisclosed comments she made in public and on social media about Herrera.

Herrera’s resignation comes after he filed a complaint against Smith.

As a condition of his resignation, Herrera agreed not to pursue legal action against the district. He also will serve as superintendent through Jan. 22 and take an advisory role until June 30. In addition, he’ll receive a $105,000 severance.

Green cried while she read a statement to the board about Herrera.

"His skill set was like nothing we have ever seen in this district," she said. "So this is painful, very painful."

Green announced her resignation at the end of the meeting, citing “dysfunctional behavior of two unnamed board members” who “had interfered with further progress of district initiatives.”

According to the district, Johnson resigned “with deep regret and could no longer serve due to the constant dysfunctional behavior of two Board members.”

Johnson chose not to run for reelection and had about 45 days left before his term expired.

Missing from the district’s statement was a response to the allegations of racism.

In June, school board members argued over a resolution supporting diversity and eradicating “racism, bigotry, discrimination, hate, and violence.” At the time, Smith said Black staff members were fleeing the district and cited the board’s termination of Wood Creek Elementary teacher Monique Anderson-Pickens, who is Black.

Metro Times could not reach Herrera, Smith, or the two board members who resigned for comment.

The remaining board members are expected to begin the process of filling the vacant board positions and filling the superintendent position.