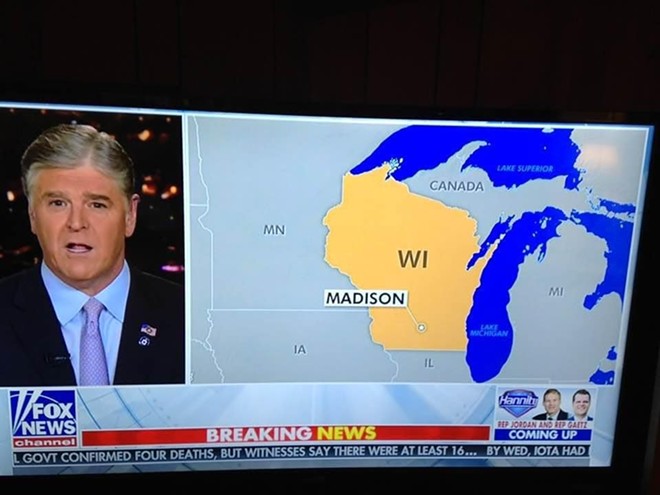 This is becoming ... a thing. And by this, we mean Upper Peninsula erasure.

We're not one to give conspiracy theories much thought — though Rudy Giuliani's recent public melting, Mitch McConnell's zombie hands, and Vice President Mike Pence's blood eye have us considering the validity behind the existence of “lizard people” — but there has to be something wicked behind the constant Michigan-related mix-ups.

The latest flub comes from none other than the dunderheads over at Fox News, the same network that mixed up Mississippi and Michigan when reporting on Hurricane Sally in September. For the record, Michigan was not in Sally's path. Like, not even close.

This time Fox News erroneously labeled Michigan's Upper Peninsula as being part of Canada while reporting on some trifling post-election happenings in Wisconsin.


Some Twitter users felt this was a slap in the face to Michigan's Yoopers, while others suggested Canada should be the offended party in Fox's error.

Admittedly a mistake, but would that be worse than being part of Michigan?


Of course, Fox News is not alone in their mitten muddling. There's even a Facebook group dedicated to maps that omit the Upper Peninsula.

In September, White House Press Secretary Kayleigh McEnany mixed up Michigan and Mississippi when making a congratulatory announcement welcoming the return of Big Ten football during a pandemic. Of course, she mistakenly booted Michigan's teams for Mississippi's because state abbreviations are a really difficult thing to Google.

Soda pop brand Mountain Dew is also guilty for having erased the U.P. during its 2019 #DEWnited campaign when they let Wisconsin absorb our pleasant peninsula on its promotional material. To make up for their mistake, they designed a special limited edition bottle of Dew just for our Yooper neighbors.

It's your turn, Fox.

@FoxNews is dumb and sloppy. Facts and the truth don’t matter.