Republicans are running out of time, even if canvassers refuse to certify Michigan’s election 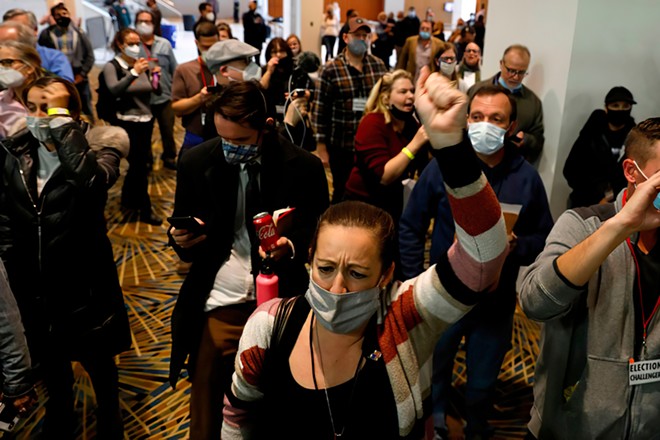 The national spotlight will shine on the Michigan Board of State Canvassers on Monday afternoon as its four members — two Republicans and two Democrats — decide whether to certify statewide election results.

The board’s two Republicans are coming under intense pressure from GOP operatives and President Donald Trump to delay certification — and possibly catapult the state into a potential constitutional crisis over spurious claims of widespread election fraud.

If the board deadlocks at its 1 p.m. meeting this afternoon, Democrats are expected to ask the state Court of Appeals to order the Michigan Bureau of Elections to certify the election, as required by the state constitution. Unofficial results show Democrat Joe Biden won the election in Michigan by more than 154,000 votes, more than 14 times Trump's margin of victory in 2016.

Republican operatives are calling for the board to delay the vote until the state conducts an audit of the election results. But election experts and Michigan Secretary of State Jocelyn Benson said the board has no legal authority to make such demands and has a constitutional duty to confirm the results. Benson added that it’s impossible to complete an audit before the results are certified because “election officials do not have legal access to the documents needed to complete audits until the certification."

“Thousands of clerks and election workers oversaw our election this fall,” Benson tweeted Sunday. “Each attests to the fact that the election was fair, secure, transparent & the results are accurate. The will of the people is clear & unequivocal. Trust this truth to rule the day.”

Nevertheless, in a letter to the Board of State Canvassers, Michigan Republican Party Chairwoman Laura Cox and Republican National Committee Chairwoman Ronna McDaniel requested a “full, transparent audit” before the election results are certified.

“This board faces a stark choice," they said in the letter. "It can either ignore numerical anomalies and credible reports of procedural irregularities, leaving the distrust and sense of procedural disenfranchisement felt by many Michigan voters to fester for years; or it can adjourn for fourteen days to allow for a full audit and investigation into those anomalies and irregularities before certifying the results of the 2020 General Election, allowing all Michiganders to have confidence in the results."

In an interview on Fox News on Sunday, Michigan House Speaker Lee Chatfield, R-Levering, warned of a “constitutional crisis” if the board doesn’t certify the tally.

"If there were to be a 2-2 split on the [Board of State Canvassers], it would then go to the Michigan Supreme Court to determine what their response would be, what their order would be," Chatfield said. "If they didn't have an order that it be certified, well now we have a constitutional crisis in the state of Michigan. It's never occurred before."

Chatfield was among a handful of Republicans to meet with President Trump on Friday. After the meeting, Senate Majority Leader Mike Shirkey, R-Clarklake, said in a statement, “We have not yet been made aware of any information that would change the outcome of the election in Michigan.”

In a statement Friday, the League of Women Voters of Michigan, the American Civil Liberties Union and the Detroit Branch of the NAACP implored the board to certify the election results.

"The Board of State Canvassers participates in a very straightforward and perfunctory process," John Pirich, an elections attorney in Michigan, said in a statement on behalf of the group. "Auditing the election is not within its scope of duties; the board is only responsible for reviewing the vote calculations and signing them."

He added, "This process has nothing to do with discretion or the board members' political leanings."

You can click here to tune in to the 1 p.m. meeting.