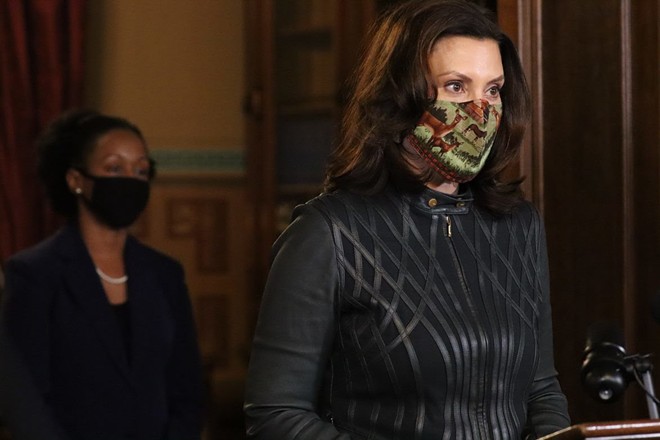 After soaring to heights far worse than the previous peak in the spring, COVID-19 cases are lowering in Michigan. However, officials are bracing for another spike following the Thanksgiving holiday, when many people traveled and gathered despite pleas from Gov. Gretchen Whitmer not to do so.

Now, with more holidays around the corner, Whitmer is again urging Michiganders to cancel plans.

"Too many people are considering traveling and I'm reiterating — please don't," Whitmer said at a press conference on Tuesday. "The next two months are going to be hard."

Dr. Joneigh S. Khaldun, the state's top medical official, warned that Michigan will likely see a spike in cases following Thanksgiving within the next several weeks. She urged anyone who did attend a Thanksgiving gathering to quarantine for at least 14 days.

Still, Khaldun had some good news.

"We are cautiously optimistic based on what we are seeing," Khaldun said. "More people started doing the right thing toward the beginning of November. That means wearing masks, not gathering, and maintaining six feet of distance from others. And we think that is contributing to the decrease in our rate of rise in cases."

The state's case rate is now at 608 cases per million people, and has been declining for the past week in all regions of the state. The rate of positive tests has also decreased slightly.

However, Whitmer and Khaldun warned Michiganders not to let their guard down. COVID-19 has reached "community spread" in Michigan, meaning that the cases aren't tied to any particular place, which makes makes thorough, timely contact tracing impossible.

"Our case numbers or hospitalizations and deaths are dangerously high already," Whitmer said. Michigan has about 20% of inpatient beds filled with COVID-19 patients.

Whitmer came short of calling for a renewed epidemic orders, but didn't rule it out. A three-week ban on gatherings of more than two households and dine-in restaurants went into effect on Nov. 18, and officials have recommended people interact with no more than one other household during that time.

Khaldun said she has reason to believe a vaccine could be available in early 2020. In the meantime, she urges Michiganders to continue to follow the same advice officials have been giving: avoid gatherings, wear a mask, wash your hands frequently, and download the MI COVID Alert contact tracing app. 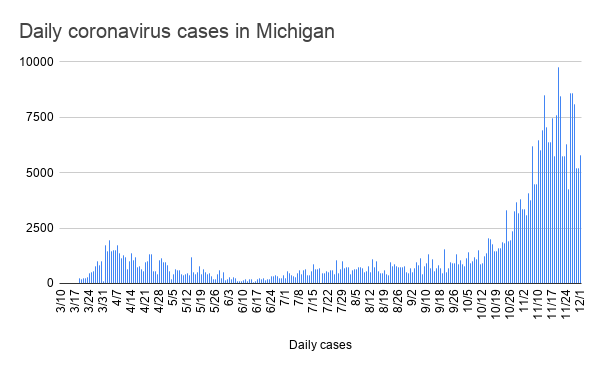