Michigan officials celebrated the success of a task force charged with reducing racial disparities of the impact of COVID-19 even as the virus continues to surge in the state.

The task force, chaired by Lieutenant Governor Garlin Gilchrist II, released an interim report on Thursday outlining the success the state has made.

"Since the beginning of this global pandemic, the coronavirus has really shined a light on the health economic educational challenges that Black communities and frankly, most communities of color face on a daily basis," Gilchrist said at a press conference. "When we observed these deadly trends presenting themselves due to COVID, we did not wait. We took immediate action. Our state chose not to wait. Black Michiganders could not afford for us to wait."

Gilchrist, who is Black, said the work was "deeply personal" for him — he knows 24 people who have died from COVID-19.

When the pandemic first rocked Michigan in early 2020, the racial disparity in the impact of the virus was immediately apparent. Though African Americans make up about 14% of the state's residents, they represented more than 40% of the earliest deaths of the virus, which experts have attributed to systemic racism that has resulted in comorbidities, implicit bias in health care, higher rates of working "essential" jobs, and other inequities in Black communities.

Now, Black people account for only 9.1% of the state's coronavirus cases and 5.7% of deaths. Since forming the task force, the average cases per million per day for Black Michigan residents dropped from 176 in March and April to 59 in September and October.

The state has also administered more than 24,000 free tests have been administered in previously underserved communities as of Nov. 16.

The Task Force has called for a number further changes that need to be made in Black communities, including closing the digital divide so more students can learn remotely, increasing enrollment in health insurance plans, more COVID-19 testing, and further awareness.

"I also want to stress that this is an interim report," he said. "The work is not done."

However, the news of the task force's successes came as Michigan reported more staggering COVID-19 figures. Dr. Joneigh Khaldun, the chief medical officer for state's health department, announced that Michigan has reported 373,197 cases of COVID-19 and 9,405 COVID-19-related deaths since the pandemic began.

While the rate of new cases has declined slightly in the past two weeks, case rates remain "alarmingly high," Khaldun said.

"Our hospitals are still working hard to be able to take care of COVID and non-COVID patients, but many are near or at capacity," she said. "Currently, 81% of hospital [intensive care unit] beds are full."

Community spread is so widespread that the state's contact tracing teams are overwhelmed. 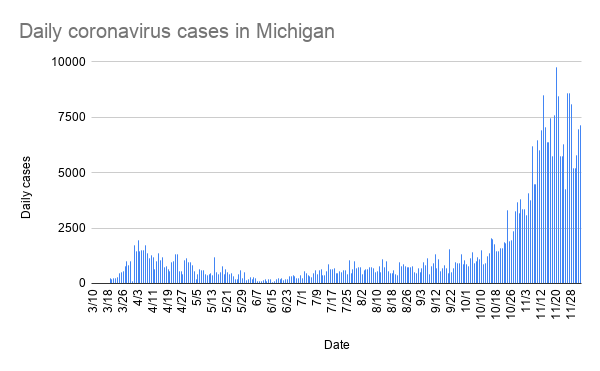 "The progress we've made is promising, but we got to continue working to protect our most vulnerable populations from the spread of COVID-19," Whitmer said. "Our number of COVID related cases and hospitalizations is still dangerously high and dozens of Michiganders are losing their lives to this virus each day. We must continue to work together to protect each other."

Though the virus continues to surge, Whitmer came short of calling for an extension of the state's latest epidemic orders, which prohibit indoor dining at restaurants and gatherings of more than two households, but didn't rule it out, saying the state is bracing for a spike in cases in the weeks following Thanksgiving. The latest epidemic orders are set through Wednesday, Dec. 9.

Whitmer said the recent leveling off of cases was a good sign, however.

"It comes down to individuals, all of us, doing our part and taking this seriously," Whitmer said.

In the meantime, Whitmer advised people to continue wearing masks when in public, maintaining six feet of distance from others, washing their hands, and avoiding indoor gatherings. The state has recommended people only interact with one other household for the three-week period. Whitmer also said the state is looking into financial relief for businesses harmed by the economic shutdown.

However, the officials stressed that hope is around the corner. Khaldun said a vaccine could be available in Michigan as early as Dec. 15. Health care workers and the most vulnerable would get priority in getting the vaccine, and it would become available to the general public in the coming months.

Gilchrist even said he would publicly take a vaccine once it's approved by the FDA.

"The vaccine coming is a good thing, but the presence of a vaccine only matters if people get vaccinated," Gilchrist said. "Several vaccines are very close to distribution, but it will be critical that you vaccinate as many people as possible. Taskforce members are hard at work right now, coming up with ways to address the fears, concerns, questions, and apprehension that exists for many legitimate reasons in communities of color in Michigan."

Gilchrist said he "[recognizes] the historical stain that past large-scale medical interventions and vaccines have left on communities of color and the Black community in particular," referencing incidents like the infamous "Tuskegee Experiment," in which officials allowed Black people to get syphilis. "I'm also confident that these challenges can be overcome," he said.

"This pandemic will end, and we want to be able to look back and say we did it best in Michigan by coming together, taking care of each other, and doing the right thing," Khaldun said.