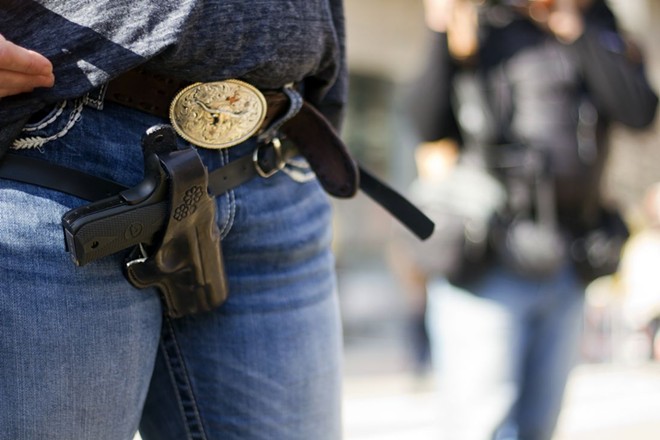 Even as President Donald Trump's various dubious legal efforts to overturn the results of the election flounder, that's not stopping his supporters from taking to the streets.

Dozen of armed Trump supporters reportedly gathered outside the home of Michigan Secretary of State Jocelyn Benson on Saturday, an act she called "intimidation" in a statement:

"As my four-year-old son and I were finishing up decorating the house for Christmas on Saturday night, and he was about to sit down to watch How the Grinch Stole Christmas, dozens of armed individuals stood outside my home shouting obscenities and chanting into bullhorns in the dark of night.

I have always been an energetic advocate for the right and importance of peaceful protest as enshrined in the United States Constitution, however there is a line crossed when gatherings are done with the primary purpose of intimidation of public officials who are carrying out the oath of office they solemnly took as elected officials.

The actions of these latest protestors are an extension of the noise and clouded efforts to spread false information about the security and accuracy of our elections that we’ve all endured in the month since the polls closed on November 3. Through blatantly false press releases, purely political legislative hearings, bogus legal claims and so called 'affidavits' that fail to allege any clear or cogent evidence of wrongdoing, those unhappy with the results of this election have perpetuated an unprecedented, dangerous, egregious campaign to erode the public’s confidence in the results of one of the most secure, accessible and transparent elections in our state’s history.

The demands made outside my home were unambiguous, loud and threatening. They targeted me in my role as Michigan’s Chief Election Officer. But the threats of those gathered weren’t actually aimed at me – or any other elected officials in this state. They were aimed at the voters.

Through threats of violence, intimidation, and bullying, the armed people outside my home and their political allies seek to undermine and silence the will and voices of every voter in this state, no matter who they voted for. Their goal is to overturn and upend the results of an election that are clear and unequivocal, and that 5.5 million Michigan citizens participated in.

But their efforts won’t carry the day. Because our democracy is strong. The will of the people is clear. And I will stand up every day in my job for all voters, even the votes of the protestors who banded together outside my home.

I began my career investigating violent neo-Nazi and white supremacist organizations throughout the country. A photo of Detroiter Viola Liuzzo, along with a replica of her Michigan license plate from the vehicle she was driving when she was murdered, hangs in my office. I am acutely aware of the risks borne throughout history of those working to stand guard over and protect our democratic process. Nothing about the incessant and graphic threats made outside my home, or those that flood my social media accounts, will deter me, my team, or the more than 1,600 election administrators across the state of Michigan from doing our jobs.

And that job is simple: to defend and protect every Michigan voter, their choice, and their votes. I will continue to guard every citizen’s vote because no matter how one voted or who they voted for, where they live, or what they look like, their vote is the lifeblood of our democracy. Ensuring it counts is central to our work as election officials. It’s in our oath of office, when we pledge to support the United States Constitution and that of the State of Michigan, both of which unequivocally and preeminently establish every citizen's fundamental right to vote.

I have spent my career defending and protecting the right to vote of every eligible citizen. That commitment has never wavered, and it will not waver now. I will continue as Michigan’s Secretary of State, proudly protecting and defending every voter and every vote."


According to the Detroit Free Press, the protesters dispersed without incident. Still, Michigan Attorney General and Wayne County Prosecutor Kym Worthy described the act as "terrorizing" Benson and her family.

"They shouted baseless conspiracy theories about the election, and in videos uploaded to social media, at least one individual could be heard shouting 'you’re murderers' within earshot of her child’s bedroom," they said in a statement. "In a civil society, there are many ways to peaceably assemble and demonstrate. Anyone can air legitimate grievances to Secretary Benson’s office through civil and democratic means, but terrorizing children and families at their own homes is not activism. This disturbing behavior masquerading as protest should be called out for what it is and roundly condemned by citizens and public officials alike."

This year, armed protesters have also stormed the Capitol Building in Lansing and gathered outside Gov. Gretchen Whitmer's personal residence, as well as outside Detroit's TCF Center, where absentee ballots for the November election were processed. In October, the FBI said it thwarted a plot to assassinate Whitmer.

"Threats against our elected officials, no matter their party, are dangerous and unacceptable," Whitmer said in a statement. "This must stop. Now is the time to come together against our common enemy: COVID-19."

Threats against our elected officials, no matter their party, are dangerous and unacceptable. This must stop. Now is the time to come together against our common enemy: COVID-19. https://t.co/MtCoEyqxQG


The state's election results were certified on Nov. 23, with Democrat Joe Biden beating Trump by more than 154,000 votes.

Last week, Rudy Giuliani — the former mayor of New York City and current attorney for Trump — appeared in Lansing for a hearing on alleged election interference. The hearing was so ridiculous that it was mocked on Saturday Night Live.

On Sunday, Trump revealed that Giuliani had tested positive for COVID-19. He and others were maskless throughout the Lansing hearing.

On Monday, a federal judge rejected a Trump lawsuit against Michigan's election results as riddled with "theories, conjecture and speculation."