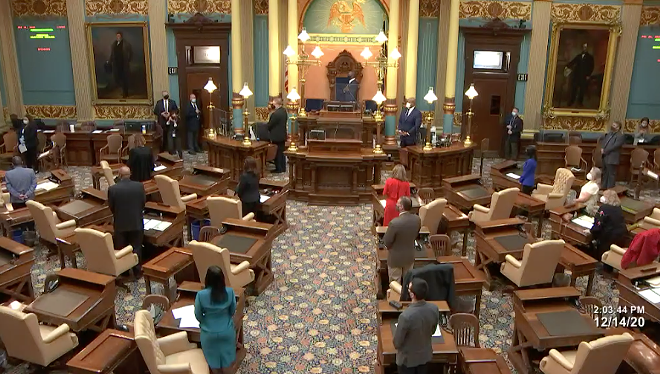 “This was truly a historic election,” Gov. Gretchen Whitmer told electors. “Michigan has chosen a clear winner of the office of president of the United States. The people have spoken. Ours was a safe, fair, and secure election.”

Biden defeated President Donald Trump in Michigan by more than 154,000 votes. A record 5.5 million Michigan residents cast a ballot in the November election.

Monday's drama-free meeting was closed to the public because of “credible threats of violence.”

Only a handful of protesters gathered outside the Michigan Capitol as Trump and some Republicans continue to make baseless claims of widespread election fraud.

Congress will tally the Electoral College votes on Jan. 6.

"It's time to move forward as one United States of America," Whitmer said.

Before the electors met Monday, state House Speaker Lee Chatfield, a Republican, said he opposes any attempt to support votes in favor of Trump.

“I can’t fathom risking our norms and institutions to pass a resolution retroactively changing the electors for Trump, simply because some think there may have been enough widespread fraud to give him the win,” the Levering Republican said in a statement. “That’s unprecedented for a good reason.”