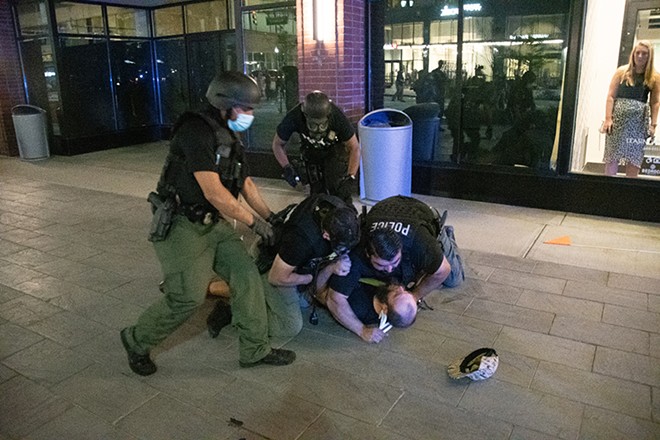 The number of times Detroit police officers used force so far this year has increased over the same period last year.

Detroit police reported an increase in use-of-force tactics in the first nine months of this year, according to a new report. Police used force 779 times between Jan. 1 and Sept. 27, a 27% increase over the same period last year, the Detroit Board of Police Commissioners report states.

Use-of-force incidents range from shooting suspects to employing Tasers. The report indicates a rise in all use-of-force categories, but it fails to state whether the force was considered justified.

Category 1 incidents, which are the most serious and include the use of firearms or Tasers, increased to 27 this year, up from 20 during the same time last year. Category 1 also includes pepper-spraying a suspect who is restrained. Of those, police fatally shot four citizens so far this year.

Category 2 incidents, which involves injuries from use of hands or chemical spray, increased 20%, to 269 in the first nine months of this year from 225 during the same period last year.

Category 3 incidents, which involve force that didn’t cause injuries, rose 20% to 393 this year from 302 last year.

Police also reported pulling a gun on a citizen but not shooting 82 times in the first nine months of this year, compared to 66 in the same period last year, a 24% increase.

"This report isn't a surprise because we've been seeing this trending for a while now," Craig said.

"There are several factors driving what's going on: the emotional impact the pandemic has had on people has led to increased aggression, and so has the anti-police rhetoric we heard for most of the summer during protests, not only in Detroit but across the country.”

Craig also said inmates are being released early, and “that’s also driving this.”

Julie Hurwitz, who sued the Detroit Police Department on behalf of the protest group Detroit will Breathe, told The Detroit News she was "taken aback by Craig using the current movement to expose police violence and racism in law enforcement as a basis for claiming people are becoming more aggressive."

"My observation is that the community recognition of police violence is what's making police more aggressive," Hurwitz said. "I think that's evidenced in the way DPD has responded to all the nonviolent protests in the city."