Now residents may finally have a way out.

Marathon Petroleum Corp. on Thursday announced it’s offering to spend up to $5 million buying homes in the Boynton neighborhood in 48217, the most polluted ZIP code in the state, to create a buffer between the refinery and residential areas closest to I-75. The company is also working with the Detroit Land Bank Authority to buy or lease 38 abandoned homes and about 140 vacant lots, with plans to demolish the houses and maintain the vacant land.

“We take great pride in being a part of Southwest Detroit, and we are committed to continuing our partnership with the community to improve the quality of life here,” Dave Leaver, general manager of the refinery, said in a statement. “We are happy to make this property purchase option available to accommodate those who would like to participate in the program. Our intent is to work with residents in the target area to secure property and create green space at the north end of the neighborhood.”

Marathon has contracted with Community Interaction Consulting (CIC), a real estate services company, to administer the property purchase program. CIC plans to open an office in the neighborhood in January to help residents in the purchase process.

In 2012, Marathon offered above-market prices to buy homes in the mostly white neighborhood of Oakwood Heights in northern 48217 to make way for an expansion of its refinery. But the same offer wasn't extended to Boynton. Residents protested in 2017, holding signs that read, "Buy more homes."

In a cover story in January, Metro Times explored the pitfalls of living in 48217, which is inundated with a toxic stew of chemicals wafting from steel mills, coal-fired power plants, gas flares, billowing smokestacks, towering piles of coal and petroleum coke, a salt mine, wastewater treatment plant, and Marathon, one of the nation's largest oil refineries. A nauseating stench that smells like rotten eggs, burnt plastic, and gasoline permeates the air. Heavy-duty trucks spewing harmful emissions rumble to and from factories all day and night, often carrying toxic chemicals and debris.

The Environmental Protection Agency (EPA) considers the area a non-attainment zone because of dangerous levels of sulfur dioxide — a known contributor to asthma — and ozone that exceeds what's permitted under the Clean Air Act. Toxic chemicals such as benzene, hydrogen cyanide, and chromium also permeate the air and can be deadly. Hydrogen cyanide, a byproduct of processing crude oil, was used in concentrated forms by the Nazis to kill prisoners in death camps. Even low levels of hydrogen cyanide can cause headaches, nausea, breathing trouble, and chest pain.

Marathon has a history of noncompliance and excessive emissions. The refinery failed three EPA inspections since 2016 and received nine environmental violations from the state in 2018. In 2019, the Michigan Department of Environment, Great Lakes and Energy (EGLE) issued at least nine violations to Marathon for noxious odors and exceeding legal limits on toxic emissions. 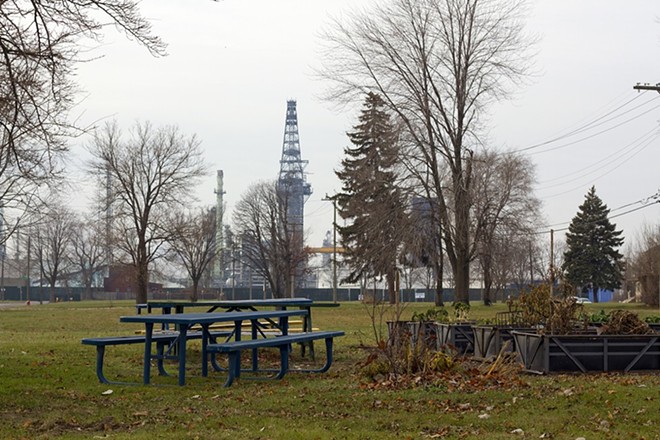