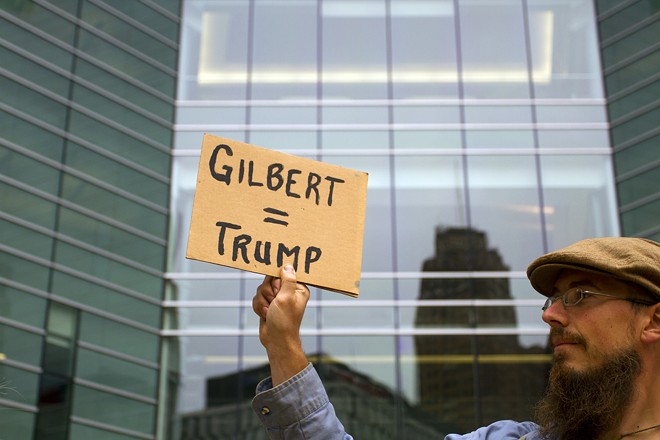 Billionaire Dan Gilbert, his family members, and the political action committee for one of his Detroit-based companies have thrown money into the Georgia Senate race to help the Republican incumbents win Tuesday’s election.

Gilbert, who relies on Democratic cities like Detroit and Cleveland for tax incentives, donated $2,800 — the maximum allowable amount — to Sen. David Perdue. Gilbert’s family members chipped in an additional $2,800, according to Progress Michigan, a liberal advocacy group that examined campaign finance records.

The political action committee of Gilbert’s Detroit-based Rock Holdings donated $5,000 to Sen. Kelly Loeffler on Nov. 14. The PAC also contributed $7,500 to Perdue in June and $5,000 to the Georgia Republican Party on Nov. 11.

Matt Cullen, former CEO of Bedrock Detroit and current principal and chairman of JACK Entertainment — both of which are Gilbert companies — donated $2,800 to Perdue in June.

Jay Farner, an executive at Gilbert’s Quicken Loans, donated $2,000 to Perdue in July 2019. Bill Emerson, vice chairman of Rock Holdings and former CEO of Quicken Loans, chipped in $2,800 on Dec. 1, as did his wife.

This isn’t just any race. Control of the Senate is at stake, and a Republican victory could undermine President-elect Joe Biden's plans to help Detroit's lower-income families.

After Trump won the primary in 2016, Gilbert attended a secret, $25,000-a-plate fundraiser at his Chrysler House building in downtown Detroit for Donald Trump and the Republicans National Committee.

Gilbert has said he supports candidates of both political parties. "Our interests are in the policies at the federal level, and not the politics surrounding the elections," Gilbert said in a 2017 statement. "We have often supported both political parties in the same election so that we have the ability to impact positive change, regardless of who occupies the offices." Indeed, Gilbert also gave $75,000 for a fundraiser for Hillary Clinton's unsuccessful presidential campaign.

In the Georgia Senate race, Democrat Jon Ossoff is challenging Loeffler, and Democrat Raphael Warnock is running against Perdue.