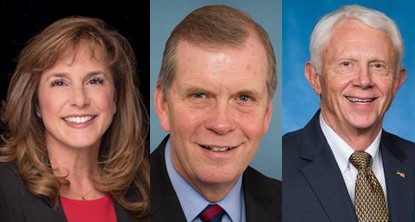 The Michigan Democratic Party is calling for the resignations of three Republican members of Congress for casting a vote to prevent the certification of the Electoral College last week.

Without a shred of credible evidence of widespread election fraud, their votes represent an assault on democracy, said Lavora Barnes, chairwoman of the Michigan Democratic Party.

“Representatives Walberg, McClain, and Bergman’s actions have been nothing short of an attack on our democracy, a betrayal of those who they represent, and an attempt to overturn a legitimate election in favor of a wannabe authoritarian,” Barnes said in a statement. “Their conduct is a disgrace to the three Congressional districts they represent, and to all the people of Michigan. They each should resign — immediately.”

The U.S. House plans to vote on impeaching Trump on Wednesday after he incited the violent mob of supporters to storm the Capitol.

The GOP trio condemned the attack but took no responsibility for adding to the anger by using decisive, baseless rhetoric.

“I hope the good people of Michigan’s 1st, 7th, and 10th Congressional districts see this blatant assault on our democracy, and their freedom, for what it is and join us in calling for the immediate resignation of Representatives Bergman, Walberg, and McClain,” Barnes said.

Trump is likely to become the first U.S. President to be impeached twice.