Michigan man charged in Capitol insurrection 'among the most violent' rioters, prosecutors say

The actions of a Wixom man charged with attacking police with a hockey stick during the U.S. Capitol insurrection on Jan.6 “were among the most violent of all participants,” federal prosecutors said.

Michael Joseph Foy, a 30-year-old former Marine, is scheduled to appear in federal court Monday for a detention hearing, and federal prosecutors are urging a judge to keep him locked up as the case proceeds.

"Images and video taken at the Capitol show Foy attacking officers guarding the doors," Assistant U.S. Attorney Hank Moon wrote in a motion reviewed by The Detroit News. "The scene is chaotic, graphic, and brutal."

Foy struck Capitol police in the “face, head, neck and body area” at least 10 times with the hockey stick, prosecutors said. About four minutes later, video shows him shouting to the crowd before crawling through a broke window of the Capitol building.

It appears he took “a leadership role in the chaos,” prosecutors said.

Here's a better angle of Michael Joseph Foy, of Wixom, Mi., beating police with a hockey stick at the U.S. Capitol. The FBI arrested him yesterday. pic.twitter.com/4212HAnhq8

Foy is charged with felony counts of assaulting an officer, interfering with law enforcement during a civil disorder, obstructing an official proceeding, and entering a restricting building with the intent to disrupt government business while carrying a dangerous weapon.

Prosecutors said Foy also attended a protest at the TCF Center in Detroit on Nov. 6 and a “Stop the Steal” rally in Lansing on Nov. 14.

In the court filing, prosecutors said Foy appears to have a substance abuse problem, indicating he reported drinking 10 beers a day and has a mental health history.

"Given his history and characteristics, Foy's detention is appropriate in this case," Moon wrote.

Foy is the second Michigan suspect arrested by the FBI for allegedly storming the Capitol. Karl Dresch, who sold right-wing paraphernalia out of his Calumet home, was arrested earlier this week after photos showed him inside the Capitol. 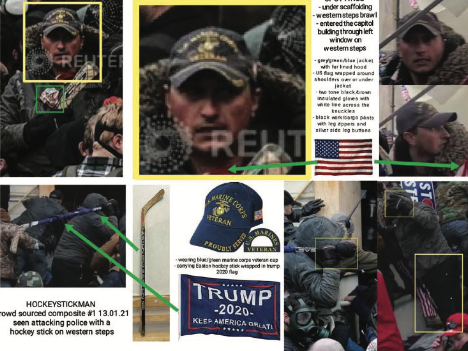